This church was located just north of the Union Cemetery in Alta Vista. Only a stone marker and a plaque remain there today (July 2017). The plaque reads:

On this site in 1914 the Ebenezer Evangelical Church was erected. Merged in 1946 with the United Brethren, it became Ebenezer Evangelical United Brethren Church. This church united with the Methodist Church in 1968. At the time of its closing January 1, 1981 it was named Alta Vista United Methodist Church. This is a memorial to all who had a part in its long and effective service to this community.

This is a partial transcription of an article in the New Hampton Tribune, June 30, 1955, accessed at Newspapers.com:

In 1939 the church celebrated its 75th anniversary. Upon the merger of the Evangelical Church and the Church of the United Brethren in Christ, the name of the local church was changed from Ebenezer Evangelical Church to the Evangelical United Brethren Church. Since its beginning over 91 years ago, the church has continued to be a blessing as it has ministered to the needs of this community. The Rev. Robert Carey is pastor. The history of the Alta Vista Evangelical United Brethren Church dates back the year 1864 when Rev. J. V. Sander, Rev. Banse, and others who are unknown did pioneer missionary work in the area of North Washington and Alta Vista, organizing classes for Bible study and Christian fellowship.

The first such class, known as Deep's Class, met in a brick schoolhouse in North Washington and later in Solomon Deep’s home. When the Deeps moved nearer to Alta Vista, the class continued to meet in their home. Another similar class, in existence since 1871, met in the Lou Piehi home in Alta Vista and later, services were held in his barn. For several years just prior to the erection of a church, services were held in the schoolhouse.

Church Built In 1876 - a one room church was built on the northeast corner of the main intersection in Alta Vista, being the first church in the town. Rev. Otto Gerhardt was the pastor at that time. Later in 1895, a parsonage was built and the mission was called the Alta Vista Church. The parsonage has been modernized and is still in use today. [Note: 1955]

New Church In 1896 - the church was moved from the center of town to its present location on South Main St. In 1914, under the ministry of Rev. J. V. Knoll, the old structure was torn down and the present structure erected. The earliest record of membership was in 1886 when there were 48 members. The charter members included Mr. and Mrs. John H. Piehn, Mr. and Mrs. August. W. Piehn. Mr. and Mrs. John Rabe, and Mr. and Mrs. John Hockspeier. Others associated with its earliest beginnings were Solomon Teep, Henry Heinmuller, and Will ????. The names of David Cawelti, Herman Piehn, George Hockspeier, Albert, Lou and Fred Reinhart, Gus Piehn, Arnold ?iehn, and Emil Haefunger have been prominent in the subsequent historv of the church.

The highest membership was in 1929 when there were one hundred eleven members. The oldest living member is L. L. Reinhart, now past ??? of age.

This information was compiled by Bruce Kuennen, who visited the site in July 2017. 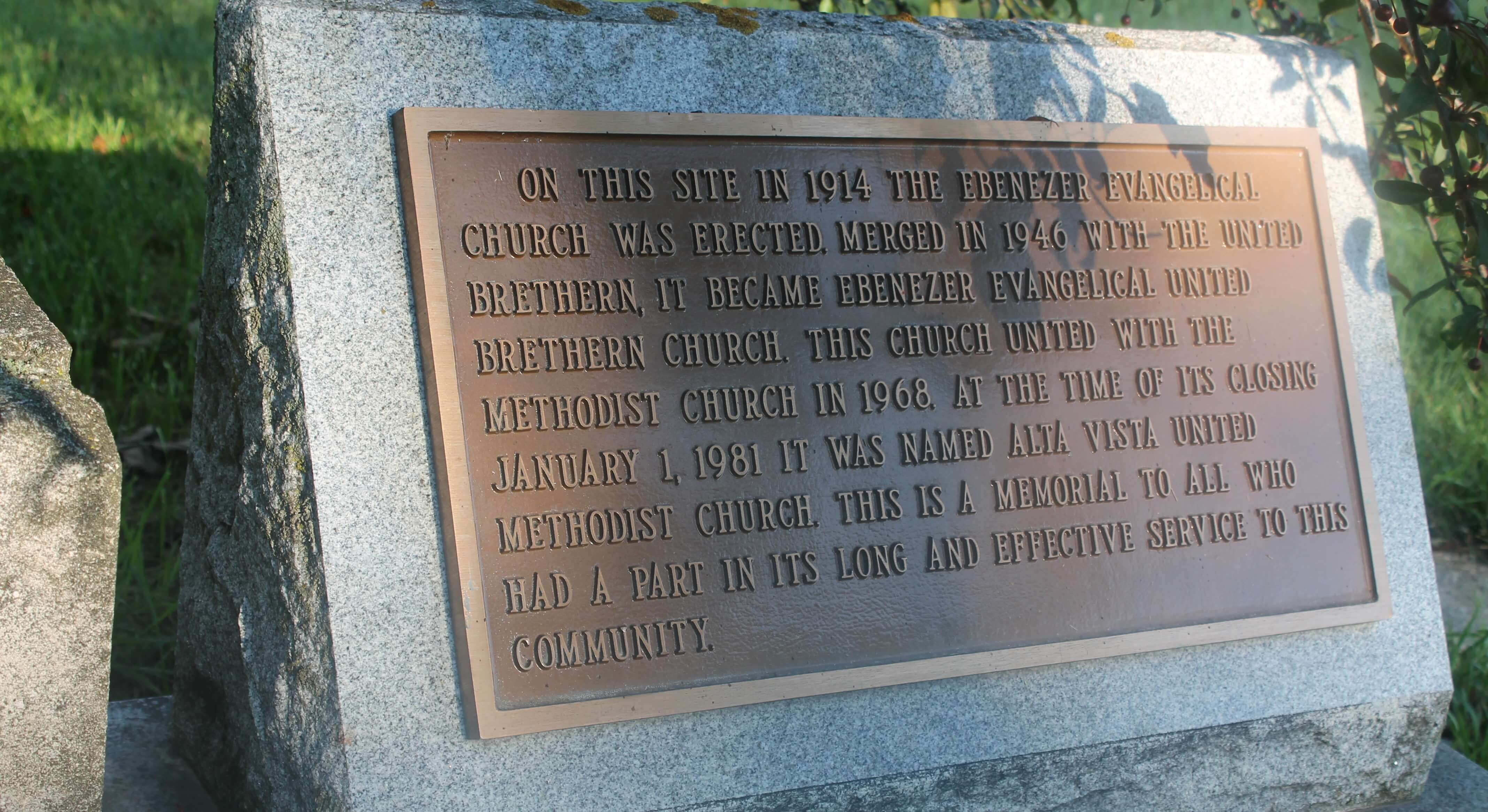