Christian Prairie Catholic Church was located on the NW side of Sec. 25 in Fredericksburg Township in Chickasaw County, Iowa.

In 1884 Mary Bollinger sold 5 acres to Rev. John Hennesy, Bishop of Dubuque Diocese. In 1903 that land was deeded to a Mr. Block from James Keane SGL. Archbishop of Dubuque. A township map of 1892 at the Chickasaw County Courthouse in New Hampton lists it as a Catholic Church and cemetery. The centennial issue of the Sumner Gazette lists it as Christian Prairie Catholic Church. A former resident of the area in the early 1900s indicated the people living in the area were Irish Catholics, who later moved to the Lawler, IA area. After the sale of land back to the farmer the church was moved in 1905 about a mile north to the John Kenny (McKenny) farm in Sec. 14 and is being used for grain storage. (This was the Whitnable farm in 1986) The gravestone markers were set up along the west road fence and were there for many years. After a thorough search of the area, none were found. No one who knew what had happened to them was found. An obituary of a former resident of the area states she was born at Christian Prairie in 1880. Possibly church services were held in a school, a home or another Catholic church nearby prior to the building of the church.

Rev. Kleiner, pastor of the Immaculate Conception Catholic Church came to Sumner, Iowa in 1950. At that time he was told that in 1903, when Mr. Block bought the church property from Bishop of Dubuque he not would take the land until the graves were moved. Tim Corkery and Bill Hughes moved some of them to nearby Mt. Calvary cemetery in Sumner and were marked with wooden crosses, and some to Mt. Carmel in Lawler. The remains taken to the Lawler cemetery were put in one common grave with one wooden cross to mark it. There seems to be no record of that at Lawler. When in 1950 Rev. Kleiner went to Mt. Calvary cemetery there was only one broken wooden cross left in the area where the graves were put in the northwest part of the cemetery. He has no records of the deaths at Christian Prairie. There are a few baptism and marriage records at Immaculate Conception but not all of them as he knew some people that said they were baptized there, but there is no record of it. Also, Rev. Fisher had a young girl rewrite some records in a book and he found mistakes were made in that.

Wilson Grove Cemetery is located between Sumner and Christian Prairie and has some Irish names on the markers. Richard Creager of Sumner, was the caretaker of Wilson Grove and lived in the area all his life.

The Bremer County History Book at the Sumner Library states that the Rev. John Hogan resided in Sumner from 1895 to 1909. He also served the Missions around the area.

This information was compiled by Alberta (Hackman) Bouska in 1986. Here is a copy of the original typewritten document about the Christian Prairie Catholic Church. 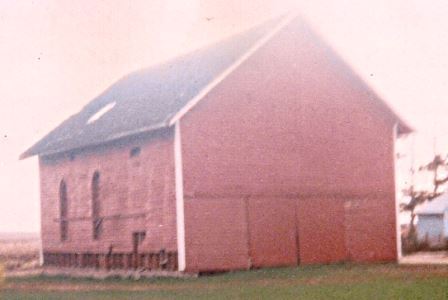 Christian Prairie Church, after it was moved to a farm in section 14 from the original site in section 25, Fredericksburg Township,to be used as a granary. Note the church windows and the granary doors.