Memorial Services will be held at 11:00 A.M. Friday, March 7, 2008 at Fjelstul Funeral Home in Decorah with Rev. Matthew H. Perkins officiating. Private Family inurnment will be in Phelps Cemetery in Decorah.

Friends may call after 9:00 A.M. Friday at Fjelstul Funeral Home.

Barbara Hunt was born in Bloomington, Wisconsin on Valentines Day in 1919 to Arthur C. and Eleanor (Whitcomb) Bishop. The family moved to Decorah when Barb was eleven years old, where her dad took over publication of the Decorah Newspaper and served as editor of the Decorah Public Opinion. Barb attended Decorah High School and was elected student body president. She graduated, on the honor roll, with the class of 1936.

Barb married Robert R. Hunt on July 14, 1946 at the Little Brown Church in Nashua, Iowa, and they moved to Decorah, Iowa. To this union two sons were born: David and Craig.

Barb began employment as a staff writer at the Decorah Newspapers in 1946 and retired after a 62-year career in journalism. She was also a Sunday school teacher for 15 years at the Congregational United Church of Christ and she was a member of the Library Board and the P.E.O.

Barb became a resident of the Aase Haugen Home on August 1, 2005.

She was preceded in death by her parents; and her brothers, Karl and Harry Bishop.

She is survived by her husband, Robert of Decorah; and her two sons: David Hunt of Tipton, Iowa, and Craig Hunt of Decorah. 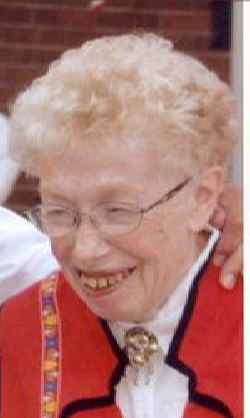