Funeral Services will be held at 1:00 P.M. Monday, September 18, 2006 at Peace Lutheran Church in Ridgeway, IA, by Rev. Phillip Olson and Rev. Ginny Olson. Burial will be in Lincoln Lutheran Cemetery, rural Ridgeway, with Full Military Honors accorded by Helof Holm V.F.W. Post No. 1977, Bernatz-Symonds American Legion Post No. 163, D.A.V. Hamre-Giesen Chapter No. 8, and AMVETS Post No. 96, all of Decorah.

Friends may call from 11:00 A.M.-1:00 P.M. Monday at the church. Fjelstul Funeral Home in Decorah is assisting the family.

Clifford Field Bakken was born December 27, 1914 in Ridgeway, Iowa, the son of John W. and Sophia (Field) Bakken. He was baptized on January 31, 1915 and confirmed on May 11, 1930 at Lincoln Lutheran Church, rural Ridgeway. He was a graduate of Ridgeway High School.

Clifford was a school bus driver for the Ridgeway School District for 18 years and worked on the family farm with his brother Russell from 1929 until the farm was sold in 1970. Following the sale of the farm, Clifford worked at the Ridgeway Lumber Company for several years.

He was an active member of the Ridgeway American Legion Post and served over thirty years on the Ridgeway Rural Fire Department. Clifford participated in his town's civic affairs, he was a member the Ridgeway Community Band and he helped in maintaining the streets and water supply. He delighted in making holidays special for everyone with his generous gifts of water tower decorations. He enjoyed fishing and having his nieces and nephews help him around the farm.

He became a resident of the Winneshiek County Care Facility, now known as Oneota Riverview Care Facility, in 1976, where he was a founding member of the county home band and worked for Camcar. Clifford loved music and up until recently played the marimba and the drums. He enjoyed reading books and had many friends at the care facility. Clifford died Thursday, September 14, 2006 at Oneota Riverview Care Facility in Decorah at the age of 91 years after a lengthy illness.

Clifford was preceded in death by his parents; and two brothers, Howard and Russell Bakken.; a sister-in-law, Geneva Bakken; two nephews, Gaynor and John Bakken and a niece, Linda Schwartz. 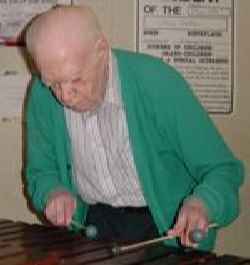