Funeral services will be held on Wednesday, July 20, 2005 at 11:00 a.m. at the Decorah Lutheran Church with Rev. James Glesne and Rev. Bryan Robertson officiating. Burial will be in Phelps Cemetery, Decorah, Iowa.

Glenn Paul Rilling was born on June 10, 1919, the son of Chris and Rose (Kafka) Rilling near Fort Atkinson, Iowa. Glenn attended St. Johns Catholic School and one year of public school in Calmar. Glenn worked at the CC Camp, farmed near Fort Atkinson and then worked as a mechanic in Decorah. Glenn married Rosie Barth on September 23, 1941 at St. Johns Lutheran Church in Locust. Glenn operated Rilling Motors in Decorah and sold Harley  Davidson motorcycles, boats, automobiles and farm equipment, retiring in 1979. Glenn enjoyed doing hill climbs on his motorcycle and flying his plane. In later years, he enjoyed visiting with friends, camping near Marquette and boating on the River. Glenn was a member of the Decorah Lutheran Church, the Elks Lodge and Silvercrest Golf Course. Glenn was known by many as the Candy Man, giving candy to everyone.

Glenn was preceded in death by his parents; his wife, Rosie on October 12, 1992; one sister: Jeanette Schmitt and one brother: Dean Rilling. 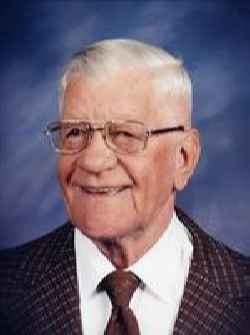