Funeral services will be held at 11:00 a.m. on Tuesday, December 20, 2005. at St. Johns Catholic Church in Fort Atkinson, Iowa with Rev. David Beckman officiating. Burial will be in the church cemetery.

Leonard L. Cervenka was born on November 2, 1918 the son of Phillip and Elizabeth (Kovar) Cervenka on the family farm west of Fort Atkinson, Iowa. Leonard attended country school and St. Johns Catholic school in Fort Atkinson. He farmed with his father on the family farm and married Irene Svoboda on June 7, 1943 at Holy Trinity Catholic Church in Protivin, Iowa. Together they farmed the farm for many years, retiring in 1984, when Kevin took over the farm. Leonard enjoyed playing cards, watching the Minnesota Twins, driving tractors but he especially loved to farm. Leonard was a member of St. Johns Catholic Church.

Leonard was preceded in death by his parents; two brothers: Jerome and one brother in infancy; one sister: Viola Jirak. 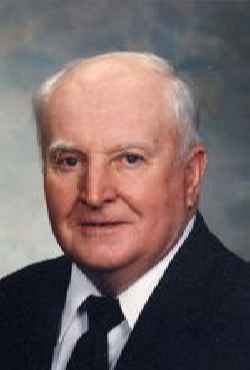