Funeral services will be held at 11:00 a.m. at the Calmar Lutheran Church in Calmar, Iowa with Rev. Norman Bauer officiating. Burial will be in the church cemetery.

Florence Margaret (Wangsness) Albertson was born on January 9, 1908 the daughter of Lasse and Hansina (Hermanson) Wangsness at their home between Calmar and Ossian. She was baptized by Pastor Paul Koren on January 16, 1908 and confirmed on June 15, 1924 at the Calmar Lutheran Church. Florence attended the Lee country school near Ossian and then went to Calmar Public School thru ninth grade. She married Orlando Albertson on January 18, 1928 at the Calmar Lutheran Church and they were married for sixty-one years. They purchased their farm near Spillville in 1938. Florence and Orlando enjoyed their farm by the Turkey River, where they milked cows and raised beef cattle. She raised many chickens and sold eggs to help get by during the Depression. Her hobbies were baking, crocheting, embroidery, sewing and having big gardens. She also enjoyed playing cards with friends and family and going dancing with Orlando, the love of her life. After Orlando passed away in 1989, Florence continued to live on the farm. In September 2003, she moved into an apartment in Ridgeway, which she enjoyed so much. After having a stroke in June 2004, she moved to the Oneota Riverview Care Facility. She treasured her family and all of her grandchildren and great grandchildren. Florence was a member of the Calmar Lutheran Church all of her life. She taught Sunday school and was a member of WELCA and ladies circle.

The family wishes to thank the Oneota Riverview Care Facility for their loving care of Mom during her stay. 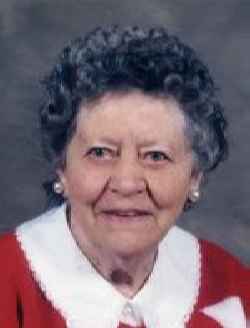