Surrounded by his loving family, Larry Peterson, 80, of Forest City, passed away on Saturday, November 2, 2019, at MercyOne Medical Center in Mason City.

Larry, a son of Ernest and Nita (Nelson) Peterson, was born on June 12, 1939, at his parents home in Crystal Lake, Iowa. After graduating from Buffalo Center High School in 1957, he served his country in the U.S. Army while stationed in Arkansas and Oklahoma before being deployed to South Korea. On August 4, 1962, he married Kathy Thompson at Immanuel Lutheran Church in Forest City. They lived in Forest City and the surrounding area for fifty-five years. Following his honorable discharge from the Army in November of 1964, he moved to Forest City where he farmed for five years and joined Immanuel Lutheran Church. After a short time working at Winnebago Industries, he accepted a position at the Joice Co-op Elevator, which later became the Top of Iowa following several mergers in 1972. For his part, Larry retired in 1999 after having served as the Manager. Nevertheless, he continued to work periodically as an Interim Manager at the Forest City and Elma, Iowa, elevators. Otherwise, he enjoyed spending time with his family, fishing, and watching sports and news reports on television.

Larry is survived by his wife of fifty-seven years, Kathy, of Forest City; two sons, Terry (Lori) Peterson, of Hinsdale, Illinois, and Tim Peterson (Nicole Kunkel), of Forest City; his grandchildren: Jennifer (Nick) Merideth, Megan (Seth) Miezwa, Lauren (Drew) Nieson, and Josh and Kyle Peterson; nine great-grandchildren with one more expected in May 2020; and his brothers, Gary and Jerry (Julie) Peterson; as well as by many brothers- and sisters-in-law, nieces, and nephews.

He was preceded in death by his parents, Ernest and Nita Peterson; his sister, Bev Borg; and his nephew, Jerry Peterson.

Celebration of Life Services will be held at 2:00 P.M., Sunday, November 10, 2019, at Immanuel Lutheran Church in Forest City with Pastor Zech Anderson officiating. Military Honors will be conducted after the service by the Forest City American Legion Post #121. A gathering of family and friends is scheduled for one hour before the service at the church. In lieu of flowers, memorials may be directed to the Larry Peterson Memorial Fund in care of the family. 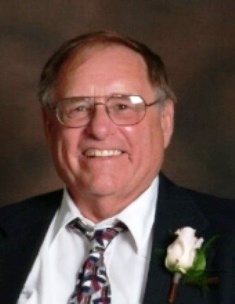