Irvin, born in Des Moines, Ia., would have been 34 next Thursday. He volunteered for foreign service in the early part of the war and left the United States in April, 1943, for London.

D-day.
For more than a year he covered invasion preparations in Britain.

When D-day came, Irvin, attached to the air forces, took numerous airviews of the invasion armada as the Normandy beach-head was established.

Lloyd Stratton and Robert Bunnelle, AP executives who visited Irvin last week, said he was then in excellent health and had only one complaint-that he was not seeing enough action.

However, he already had witnessed some of the hottest fighting and had taken the first pictures of the German rocket gun site on the Cherbourg peninsula.

They added that he was extremely popular among army, air force and newspaper representatives and generally admired for his personal bravery.

8 Years Here.
Irvin attended the University of Iowa and Drake university before joining The Des Moines Register and Tribune, where he worked eight years before joining the AP in Kansas City in August, 1936.

Irvin covered part of the Landon presidential campaign in 1936 and was transferred to the Detroit bureau of the AP in January, 1937, when he covered major strikes and industrial disturbances. He remained in Detroit until he went to England.

The photographer's wife is the former Kathryne Hankin of Los Angeles, Cal. She is living in Los Angeles.

Miss Hankin was Irvin's second wife. He was divorced from his first wife, the former Marjorie Scholl, in 1934, after a marriage of more than two years. The first Mrs. Irvin was society editor of The Des Moines Register at the time of their divorce.

Other Survivors.
Surviving besides his parents and wife are a brother, Second Lieutenant James Richard Irvin, stationed at Fort Benning, Ga., and a sister, Mrs. Mary Louise Edwards, Des Moines. His father is Democratic candidate for county auditor.

Mr. Irvin said the family had received a letter from the photograper on Monday.

BEDE IRVIN WAS BURIED IN FRANCE

Bede Irvin, Associated Press photograper, was buried Thursday in a special graveside memorial service attende by his newspaper collegues and army officers. He was placed in the first cemetery laid out in France during this war near the Bayeux-Carentan highway with services conducted by Major Smeltzer, chaplain of the Ninth Air Force to whic Irvin was accredited.

He was killed by the explosion of a bomb while making pictures of the coordinated activities of the air and ground forces in a forward area of the St. Lo battle front in Normandy.

Mr. Irvin grew to manhood in Des Moines, where he was employed for several years as photograper for the Register and Tribune.

During his boyhood he spent several of his vacations in the home of his grandparents, Mr. and Mrs. Julius Nixon of Stockport, and is well known by many citizens of that community who regret to hear of his passing.

"During the period of his assignment with the 9th Air Force, I came to know Mr. Irvin well. He flew frequently as a photographer observer with our medium bombers and performed exceptionally meritorious service in the pictorial coverage of personnel and activities of the entire airforce.

I feel a deep sense of person loss at his passing, which should be regarded by one and all as the loss of a highly trained professional soldier who died in service of his country.
---------------------------------------
Lee McCardell of the Baltimore Sun, who was with Irvin at the time the Mauraders flew over the field, said Irvin "apparently hesitated a split second to pick up his camera before diving for a nearby ditch. He was caught in mid air by a bomb fragment and killed instantly."

Irvin was found by McCardell crumpled in a ditch, with one camera around his neck and the other lying near an outstreteched hand.

Irvin, a tall, good natured fellow, would have been 34 next Thursday. He was a native of Des Moines, Iowa, and volunteered for foreign service in the early party of the war. He was the first American photographer assigned to the European theatre of operations by the Associated Press and leftthe United States in April, 1943, for London. He had been on the Normandy front since D-day. 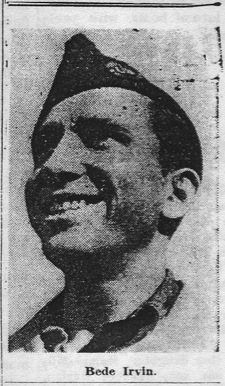