This family history came from the Sioux Center Centennial Book of 1991 page 572 and 573; and was submitted by Carol Mrs. Peter DeKoter. It was transcribed for this Bio by Wilma J. Vande Berg with some research notes added at the end.

Cynthia Boeyink was born at Gelderland, Netherlands on July 3, 1869 at the age of two she accompanied her parents, Henry and Johanna Kastein Boeyink to Alto,Wisc. Where they made their home for 12 years. Then they moved to Sioux Center where she made her home for 11 years, the later four of that time having been spent housekeeping at the Rev. Boer home in Maurice. Rev. Boer was pastor of the Maurice first Ref. Church at that time.

Before coming to Maurice she had been a Sunday School teacher in Sioux Center and she continued her service when she came to Maurice. She was an active member of the Ladies Aid for 30 years and will be remembered for her willingness to assist the unfortunate, as exemplified by her knitting army sweaters for the motherless soldier boys during World War.

Henry Van Peursem was the son of George and Mina Kars Van Peursem. He was born May 1, 1870, 5 miles west of Pella in a log house. He and his family came to Sioux County in 1872. They boarded a train in Pella and arrived in Le Mars. This is where his father assembled a wagon, loaded all their belongings and started their journey to a far place 3 ½ miles east of Maurice.

The first years of their marriage they lived on a farm 3 miles north of Maurice then later they purchased the farm 1 mile west and 1 mile south of Maurice. After many years of farming they built a house in town at 411 Main St. and retired at this home. To this union eight children were born.

Cynthia died Saturday Sept. 14, 1935 from a heart attack she had on the previous Monday. Funeral services were held at the First Ref. Church at Maurice with Rev. R. Duiker and Rev. John Straks officiating. She was laid to rest at the Sherman Township cemetery. Henry continued to live for a few years at 411 Main but later moved to an upstairs apartment in the peter Van Peursem home. Later when Peter Van Peursem sold his home to Bill Korver, Henry continued living upstairs. About 1949 he moved into an apartment by John Vander Weides in the former hotel building. He lived there until his death Aug 14, 1951

OBITUARY of Cynthia
Sioux Center News obit of 9-19-35
Mrs. Henry Van Peursem at the age of 66 yrs. 2 mo and 11 days succumbed at her home Sat. Sept 14 as a result of a heart attack Mon when she became seriously ill. The children were called and all arrived in time for the funeral which took place Tues. 1 o'clock at the house and 2 o'clock at the First Ref. Church. Rev. Straks and Rev. Duiker officiating. After the services, where 2 of her favorite hymns were sung, the remains were buried in the Maurice cemetery. Pall bearers included Ben Den Ouden, Abe Levering. J.M. Mieras, Ralph Mieras, Geo. De Groot and Albert Popma, all members of the Am. Ref. Church.
Born Cynthia Boeyink at Gelderland in the Netherlands, on July 2, 1869, she at the age of two accompanied her parents to Alto, Wis. where they lived 12 years. Their next move was to Sioux Center where she made her home 11 years. During part of this time she taught Sunday school there and continued doing so when she came to Maurice where she was employed for 4 years at the home of Rev. Boer, then pastor of the First Ref. Church.
On Feb. 25, 1892 she wedded Henry Van Peursem at the home of the grooms parents, Mr. and Mrs. Geo. Van Peursem to which union 3 daughters and 5 sons where born. They made their home in Maurice where she had been a resident the past 43 years.
Mrs Van Peursem was a strong and faithful worker of the Ladies Aid for 30 years, and her attendance at services of the Am. Ref. church. of which she was a member was marked. On the Sunday preceding her sudden illness she had attended both morning and evening services. She was among the kind hearted souls who, during the world war, knitted army sweaters for the soldier boys who were motherless and in other ways was ever ready to assist the unfortunate. At large social gatherings she was often called upon to make the delicious coffee she could so ably prepare. Her many friends join the surviving relatives, including the widower, 3 daughters: Anne, Mrs. Arthur Meenk of Everett, Wash., Minnie, Mrs. John G. Hoekstra of Maurice, and Henrietta, Mrs. Albert De Jager of Maurice: and 5 sons George of Orange City, John of Merrill, Alfred of Alton, Ralph of Sheldon and Delbert of Rock Island, Ill, 2 sisters, Mrs. G. Kleene of Hull and Mrs. H.K. Eggink, Sioux Center and 3 brothers: Gerrit, John and Ralph Boeyink all of Sioux Center and 16 grand children in mourning her departure. Two brothers and three grandchildren preceded her in death.

OBITUARY of Henry Van Peursem
Henry Van Peursem
Henry Van Peursem 81, of Maurice died in his sleep at about 8 a.m. Tuesday morning. He had not been feeling well Sunday and was asked by his son John to go home with him but he said he would be all right. He had told Mrs. Art De Koter who also has an apartment in the Maurice hotel that if sometime she didn't hear his radio at 8 a.m. she should investigate. Tuesday morning she did not hear his radio so she knocked at his door. Receiving no answer she summoned John Vander Weide who owns the place. He investigated and found Mr. Van Peursem lying in bed with his hands folded. He had been dead just a short while.
Funeral services were held on Aug 17 at the John H. Van Peursem home at Maurice and in the First Reformed Church at Maurice.
Survivors include eight children, Mrs. Anna Meenk of Lynden, Wash,. who is here, Minnie, Mrs. John Hoekstra of Slayton, Minn. George of Los Angeles, Calif.; John H. and Henrietta, Mrs. Al De Jager and Alfred all of Maurice, Ralph of Rochester, NY and Delbert of St. Louis, MO.
Also the following brothers and sister: Mrs. Will De Jong of Huntington Park, Calif,, Peter of Altadena, John of Zeeland, Mich.; Martin of Orange City and Gerrit of North Branch, N.J.
Obit of Henry Van Peursem from the 8-31-1951 Sioux Center News: 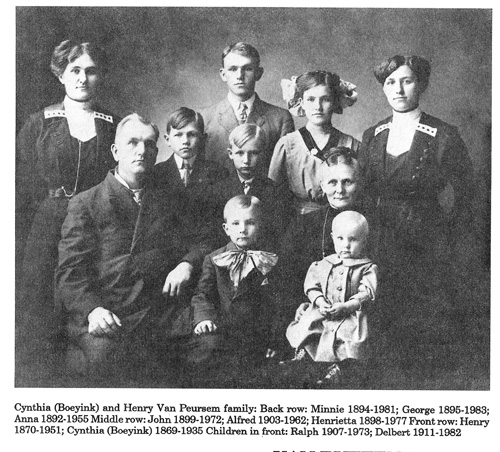