Bill Willem Arnold Van Steenwyk was born December 12, 1871 into a large family of thirteen children. His parents came to Orange City Iowa in the spring of 1870 from Pella, Iowa. They traveled by wagon train with a group of families and settled on a farm three and a half miles north of Orange City. Records indicate that Abram and Maria Johanna Le Cocq Van Steenwyk joined the Reformed Church at Orange City on May 6, 1871. Children in the family were: Jan born 1859, Johannes born 1861, Gysbert born 1864, Abram born 1865, Cornelius born 1867, Maria born 1869, Willem born 1871, Niesje, Justina, Markus born 1882, Gerhard born 1883, Annie born 1886, and Marietta born 1890. (see the Bios of Abram Van Steenwyk for more family information)

An interesting childhood experience of Willem is related in the book Pocket of Civility by Mike Vanden Bosch, which reads: W. A. Van Steenwyk who grew up on a farm several miles south of Sioux Center, recalled that he herded his fathers and two neighbors cattle for ten months every year when there were no pastured and no fences, and the roads were merely wagon ruts across the country. There was a diagonal road of this kind between Orange City and Sioux Center. One day when young Van Steenwyk was herding cattle near this road, he got cold and lay down in the rut of the wagon tracks. He awoke with a team of mules standing above him and a man yelling at them. Fortunately the mules would not walk over him.

Bill Van Steenwyk came to Sioux Center at the age of eighteen years and began working for Arend Roos, who had a harness shop in the old town. A year later he bought the John Zoerink business place. He was united in marriage to Francina Van Velthuizen, she was born September 15, 1874 to Jacob Van Velthuizen and Jannetje Roodhuizen of Orange City. Three children were born to Bill and Francina: Abram Bernie born February 8, 1895, Jacob bon June 12, 1897, and Marion born July 1, 1900. Francina died on Sept 17, 1903.

Bill Van Steenwyk then married Maria Jelgerhuis, who was born May 22, 1878 in Friesland, Netherlands to Mr. and Mrs. A. Jelgerhuis. As a child of seven, Maria came to America with her widowed mother and an older brother and sister. Tetje and Klaas Jelgerhuis. They settled at Orange City.

As a young lady of nineteen, Maria came to Sioux Center and went into the millinery business. The first year she had a partner, Miss Jennie Brink of Orange City, but later on she was on her own. In 1904 when she married Willem Van Steenwyk, but continued her business many years making and designing all of her merchandise. If the ladies of the Sioux Center community came out with a new bonnet, be it spring or fall, one could be quite certain that it came from Sioux Centers own hat shop.

In an article out of the Sioux Center News August 10, 1960 it is mentioned that Mr. Van Steewyk literally grew up with our town. He recalls when he first came to Sioux Center, the business places were located in what is not known as the Old Town. The Roos place of business where he started out, was at the time located where the Southside Service station stood in 1950. Three other business places completed the town of that day. M. Borgman and Teunis Prins each operated a general store and the Van Kerkhof-DeRuyter Hardware store. It was in his first year here, that all these business places were moved to the towns present location. Both the stores, and homes of the owners were moved, with the exception of the Borgman store. This was known as Castel Garden for many years, as it housed many families who came to this vicinity and unable to find living quarters at once, would live in the store for some time. This building was later on also moved to the towns new location and was still in use in 1960 as Lubbers Barber Shop.

In the Sioux Center News of July 31, 1941 an article stated that in 1897 Zwerik (Zoerink) sold his shop, which was located on the place where John De Gooyers Café was in 1941, to Bill. A few years later Bill bought out Muyskens Harness Shop and Jim Balkema bought the Roos Shop, Jim and Bill then became partners in a store there the Post office stood in 1941. While at the post office location Bill bought out Jim Balkema. Bill then set up a poultry store where Morrys Café was in 1941, and was in this business for three years. L Niessink and Bill Became partners in a harness shop in the building occupied by the Coast to Coast Store in 1941. A few years later Bill bought the store owned by Niessink, then sold all of the business to Bert Vander Berg. When the Vander Berg Harness Shop burned down Bell went to work for the government in Des Moines. In 1918 he stated a shoe Store and Harness Repair Shop in Sioux Center and operated it though the printing of the 1941 article. Bill had many discouragements through his many years of business but managed to build a good business at that time.

Bill and Maria Van STeenwyk moved to Temple City , California August 15, 1960 to retire and to be near three of their childrens families.

OBIT OF WM. VAN STEENWYK
Sioux Center News, January 22, 1959
Funeral services were held at Whittier, CA, at 10 a.m., Saturday for W. A. Van Steenwyk, 87, pioneer Sioux Center businessman and a life-long resident of this area except for an 8 year residence in California, who died at Temple City, CA, January 14, following a brief illness.
Burial was made in the Rose Hill Cemetery at Whittier, CA beside his wife, who passed away November 3, 1957.
Mr. Van Steenwyk was one of the oldest natives of Sioux County at the time of his passing. He was born at Orange City, June 12, 1872, the son of Mr. & Mrs. Abram Van Steenwyk, who resided on a farm near Orange City. His birth was one of the first 25 recorded in Sioux County.
At the age of 18, Mr. Van Steenwyk started work as a harness maker's helper in Sioux Center and learned a trade that he was to follow for approximately 50 years, or until the automobile and tractor dispensed with horses and the demand for harness.
He opened a harness shop in the Old Town of Sioux Center about 1895, in the days before there was a railroad here. After the business district moved to the present location, Van Steenwyk moved his harness shop. For a time his shop was also a cream collecting station for the Hanford Creamery of Sioux City, and later he took in poultry and eggs. For a brief time he served as manager of the Great Northern hotel which was located on the lot immediately east of the present Farmers Co-op Society. After cars and farm tractors began to cut the demand for harness he specialized for a while in the installation of winter tops on touring cars. Later he went into shoes, canvas and shoe repair, and continued to operate this type of business until selling out to Louie Boeyink eight years ago.
In 1951 Mr. & Mrs. Van Steenwyk moved to Arcadia, CA, where they resided until her passing in 1957. Since then he had resided at the Temple Aire Convalescent home at Temple City, CA. Mr. Van Steenwyk last visited in Sioux Center during the summer of 1958.
His first wife, Frances Van Veldhuizen, mother of his three oldest sons, passed away in 1903 and in 1905 he was married to Marie Jelgerhuis and three sons and one daughter were born to this union.
All seven children survive him, including Bernie of San Bernadino, CA; Jake of Sioux Center; Marion of San Mareno, CA; Elmer of Philadelphia, PA; Cedric of Sioux Center; Arnold of Arcadia, CA; and Mrs. David Schuetz of Atlantic, Iowa.

The picture that is attached of Bill Van Steenwyk is of poor quality as taken from old newsprint. 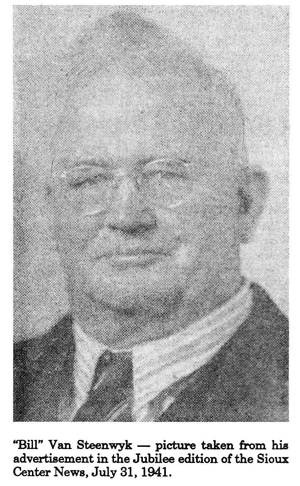