Frederick John Heuer, Sr., born September 24, 1850 in Hanover, Germany, grew to young manhood in Germany and came to the US by himself in the year 1871, at the age of twenty one years. The first years in the country were spend in Scott and Tama counties in Iowa, and later moved to a farm in Sioux County.

Shortly after their marriage, Fred and Catherine moved to a farmstead in Eagle Twp., Sec 3, where they purchased 78 acres of land, on Mar 16, 1883, from Sarah and Henry Walker, who live in Cook Co. IL. The on Mar 20, 1883. Fred bought another tract of land nearby, containing another 78 acres from J. H. Hoffman and R. E. Hoffman, who lived in Crawford Co. in the state of Ohio, at the cost of $10.00 an acre. Mr. Heuer later said it was easier to pay $100.00 an acre for land then it was to pay 8.00 or 10.00 for some of his first land. He was known to possess a keen mind for business and his chief business was farming and land investment.

By the year 1892, they had become the parents of five children: John, Fred, Sophia, William and Anna.

In 1894, Fred and Catherine built a new home on their land, which is the present structure still remaining on the old home place NE of Hawarden, where several generations of Heuer families have since, and still are living. In this new home, two children Minnie and Lillian were born.

The main trading point for the Heuers in the early day, was Hudson, SD. Mr. Heuer drove a team of white mules, with which he hauled this grain to Hudson, driving through the fords of both the Rock and Sioux Rivers, for many, many years.

The Heuers remained on the home farm until the year 1014, when they then moved to a farm on and a half miles east, following the marriage of their oldest son, John, who started is farming career on this place with his wife, the former Louise Miller.

In Dec of 1927, Fred received an extortion note in the mail, threatening to burn all the buildings on the home place farm, unless he paid a ransom of $15,000.00. which was to be equally divided and placed in three designated places in the neighborhood, before the following Sunday evening. Guards were at once placed near the home in hopes to capture the criminals, but they never made their appearance. The treat and demand for money was then dismissed as being the work of amateurs in the neighborhood.

Seven children were born to this union. Their marriages included John to Louise Miller, Fred to Anna Richardson, Sophia to Albert Klumb, William to Eva Witt, Anna to Chirs Westergard, Minnie to Emil stinfadt and Lillian to Herman Gradert.
In Dec of 1935, Fred becameill, due to his advanced age and was confined to bed most of the time until May 6, 1936, when he passed away at the age of 86 years.

Following her husbands death, Catherine spent much of her time during the winter months with her children, returning to her home during the summer months. Later she contacted the flu, which developed into pneumonia and March 19, 1939, she passed away at the age of 80 years.

Fred and Catherine Heuer were grand old pioneers and were considered prominent citizens in the community. Their place of burial is in Pleasant Hill cemetery south of Ireton. IA.

(There are several family stories on the children and descendants of the above couple in the Hawarden Centennial book pages 646-651. These include the John and Louise Heuer family, their son Clarence and Phyllis Heuer family; Randy R. Heuer family. Also that of Densel and Rose Heuer Roberts family) 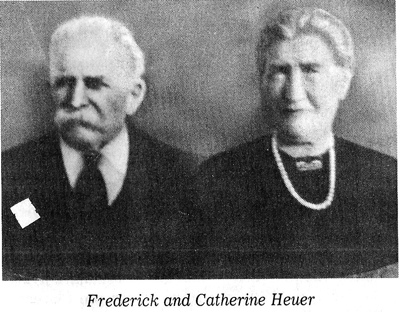