Samuel Heald, son of Levi Heald and Lydia Coppock, was born Sept 18, 1830, Newgarden, Columbiana County Ohio., and died May 3, 1913, at Hawarden, Sioux County IA. He was married Oct 23, 1850, to Jane Hobson, born Aug 15, 1832 near Richmond Jefferson County Ohio, the daughter of Stephen and Lydia Watt Hobson, and died in Sioux County IA. She is buried beside Samuel in the cemetery at Hawarden IA.
(Submitters note: See the obits of Samuel Heald 1830-1913 as well as Jane Hobson Heald 1832-1918 on the site www.iagenweb.org/sioux )

They were married at Plymouth, now called Bartlett Washington County Ohio. Both , as well as their respective families, were active members of the Friends Church and the marriage conformed to the Quaker custom. After the ceremony, Jane mounted the horse behind Samuel and they rode away to a log house among the hills where Samuel had prepared a home. At that time it was impossible to reach the cabin by other means that horseback or walking. Here their first child, Alfred was born. During this time, Samuel and his father, Levi were farming in partnership.

The partnership was broken by the death of Levi Feb. 18, 1853, from typhoid fever. The papers on file in the courthouse at Marietta tell about settling the partnership. In the records of Plymouth Monthly Meeting page 221 of the book entitled Plymouth Mens Meeting Record from No. 18, 1850 to Dec 21, 1881, the following entry is found: Samuel Heald has violated our testimony against war by paying a sum of money in lieu of personal service in the army had having been treated with therefore, did not manifest a suitable disposition of mind to condemn his deviation, we therefore disown him from having a right of membership in our religious society. Signed by and in direction of Plymouth monthly meeting of Friends, held 4th mo. 20th 1863. James Bowman Clerk.

In September of 1869, Samuel, with his wife and five children started for Iowa. Alfred, the oldest son rode a horse most of the way. Their youngest child was a baby two years old. Father and mother and four children rode in a spring wagon drown by three and four year old mules. The route led up the Hocking valley to Columbus through Springfield, past the old Tippecanoe battlefield in Indiana. They paused to rest with Quaker friends at Richmond IN. They drove through Joliet and Emerson IL, crossing the Mississippi at Savannah IL, by ferry Nov 11, 1869. They were caught in a snowstorm and took five hours to go five miles. They finally stopped at Raymond in Black Hawk County IA, after eleven weeks on the road. They spent the winter there.

Wilfred, fourteen years old, was seriously ill of rheumatism. Alfred taught school for four months earning $100. In May Samuel made a trip to Sioux County picking out his future home. Returning to Raymond he harvested a crop and then started with his family to Sioux County driving a yoke of oxen.

In the records at Marietta is an entry of a deed dated Dec 1, 1870 by which Samuel Heald and wife of Sioux County IA deeded to John Tibbles for $600. Lot No. 8 in the town of Plymouth OH. The farm had been sold before this.

They reached the town of Calliope IA, Nov 1, 1870. In 1872, they built a frame house on a farm west of Hawarden, IA. Samuel lived the rest of his life in Sioux County and died there.

(The life of Alfred W. HEALD is Chronicled below with that of his son Arthur G.Heald)

Mr. A. W. Heald was one of the pioneers of this community, he was the second school teacher in Sioux County., having taught the Calliope School in 1870-1871. The second year after the building of the first school house in the county. About 25 students attended school the first year that he taught there. Wages for teachers at that time were from $30 to $40 a month.

After teaching in Calliope one term, Mr. Heald accepted a position in a school about 14miles east of that place where he taught for two terms. The school teachers life at that time was much more difficult than at present. The first year in his new position Mr. Heald had someone take him about half the distance to his school and he walked the rest of the way. Returning Friday evening he reversed the process. The second year he purchased a pony and made the weekly trips astride his mount. After serving this school for two terms, he again accepted a position in the Calliope school, teaching there for seven years.

As stated earlier, Alfred had taught school when he was coming west with his family, so this was his second teaching position. He came here in 1879. He preempted a claim in 1872 and lived on it during the time that he was teaching school. This claim was across the Big Sioux River, in what was then Dakota Territory.

In 1879, Mr. Heald resigned his position as school teacher to accept the office of clerk during the session of the legislature of Dakota Territory, which was held in Yankton. He also held the office of county surveyor of Union Co. for two terms. Returning from the legislature he started the first hardware store in Calliope and conducted it for five years. He then sold and took up the carpenter trade. He followed this trade until the panic of 1893, when he locked up his tools.

Mr. Heald had been a member of the Masonic Lodge 45 years. He was the first member of Dale Lodge. No. 456, organized in 1883. He was one of the first councilmen to be elected to serve when the town was organized and held this office until calliope was consolidated with Hawarden. He was elected justice of the peace in 1887, and in 1889, was elected county surveyor of Sioux Co. He held both of these offices until he left Hawarden in 1901.

On leaving Hawarden, Mr. Heald went to Denver, Colorado where he has made his home most of the time since. He was caretaker of Deer Creek Park, near that place.

(submitters note  The death date of Alfred W. Heald was unknown by the author of this article. The obit of Albert W. Heald was found by the submitter in the Hawarden Independent of Nov 11, 1943 page 3. , and is herewith inserted)

A. W. HEALD DIES IN DENVER, COLO.
A. W. Heald, one of the earliest settlers of Calliope, passed away Sunday in the Masonic home in Denver, Colo.

For a number of years Mr. Heald had lived with his son, Clifford Heald, but five or six months ago be entered theMasonic home for care. Due to his advanced age, he had been in failing health for some time. His remains are being shipped to Hawarden and will arrive on the 4:45 Northwestern train this afternoon.

Funeral services will be held at theRoss 'Funeral home at 5 o'clock this afternoon with the Masonic lodge in charge. Interment will be made in Grace Hill cemetery.

Alfred W. Heald, son of Samuel and Jane Heald, was born in Columbiana county, Ohio, July 2, 1851, and so was past 92 years of age at the time of his death.

He came to Calliope with his parents, two brothers, and three sisters Nov. 1, 1870, in a covered wagon drawn by an ox team. Calliope then consisted of two log cabins and three or four frame shacks, none of which could scarcely accommodate another person, let alone a family of
seven. The first night the family camped out. Immediately they set about and erected a shack on the banks of the Sioux river, where they spent the first winter.

He grew to young manhood in Hawarden and was united in marriage with Rose Winters April 25, 1872. To this union were born 12 children, five of whom, Levi, Walter, Bert, John and Lelia, preceded him in death. The children of this union who survive him are A. G. Heald of Hawarden, Ed of Silverton, Ore., Mrs. Alice Vander Viven and Ray Heald of Los Angeles, Calif., Clyde and Clifford Heald of Denver, Colo., and Rosa Helen, who was adopted by by aunt and lives in Massachusetts. The mother died in 1896 when her youngest child was a
baby.

Mr. Heald was in the hardware business for a time while living in this city and also worked at the carpenter trade for a number of years. He was married a second time and three children were born to this union, one of whom preceded him in death. His second wife died a number of years ago.

During his earlier life in Colorado, he was a ranch man. Mr. Heald was long a member of the Masonic lodge. His father, who passed away in 1913, was a Mason for almost 60 years. One brother, Chas. Heald of Spokane, Wash., also survives him.

A G. Heald operated a produce business in Hawarden for many years; later operating a second hand store. He was a member of the Woodman Lodge. On May 14, 1951, he and Susie celebrated their 50 th wedding anniversary and he died on May 29, 1951.

(Submitters note  The obits of Arthur G. Heald and his wife Susie M can be viewed on the Sioux County web site at www.iagebweb.org/sioux obits. 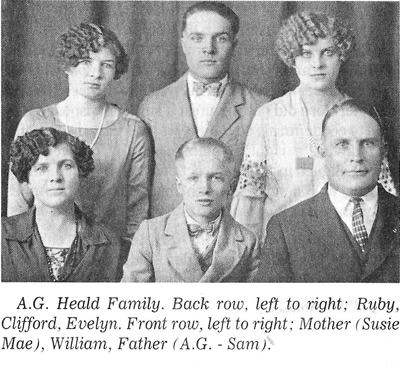