One of the noted very first settler families to settle on the present site of the town of Sioux Center was Jacob Koster, with his wife Maartje De Mots born 1831, and their eight children. Jakob Jacob Koster was born at Ermelo, Gelderland, Netherlands, on September 9, 1825 to Jan Koster and Beerdje Vanden Brink. On February 5, 1853 Jacob Koster married Matje De Mots at Putten Gelderland Netherlands. She was born at Putten to Hendrick Gysberten De Mots and Jennetje Van Wilgenburg.

Jacob and Matje left the Netherlands in 1866 and settled first at East Olive, Michigan. The reasons they left were assumed to be the same as was the case with the majority of immigrants. The Netherlands was plagued with religious problems, depressed economic conditions and in many cases a severe shortage of the basics of life.

One year later, Maartjes sister and a brothers family joined the Koster family in America. These were the Gysbert Van Beek family and the Gysbert De Mots family. Shortly after the arrival of the two related families at East Olive, MI, all three families decided to venture further across the vast new country to acquire a more promising future for their offspring.

They sojourned next to Greenleafton, Minnesota, where they joined a new Dutch settlement in that area for a few short years approximately from 1868-1871. Again the need to move on arose among the group. In September of 1871, Jacob Koster organized an oxen driven caravan of five wagons called Prairie schooners and they headed for the free land to the west. Not knowing where they would settle, for three weeks they lumbered along the 300 mile trek, with them they carried their earthly possessions that consisted of died food, a few chickens, a few cows, and horses and some very modest furnishing. They followed paths and railroads when visible but most of the time just headed into the untamed prairie, crossing rivers and streams and getting bogged down in sloughs.

As the group approached the present site of Sioux Center, Jacob Koster halted the wagons and said to his family. Here we are and here we will stay, here we will make our future home, God wiling. (The time of the year, October, necessitated an end to the journey at any rate!)

The Koster family hastily built a dugout shanty where Jerry Reitsma lived years ago, about one block directly east of the former Community Center. The Van Beeks built a shanty about one fourth mile east of the Koster family. Others in the early wagon train were the families of Gysbert Van Beek, Rensinks, Lambertus Pietenpol, and Gerrit Kempers.

Accounts of the life and hardships this group of settlers endured are referred to in several publications: The story of Sioux County, by Charles Dyke, The Pocket of Civility by Mike Vanden Bosch, and the July 31, 1941 Jubilee Edition of the Sioux Center News.

The Jacob Koster family tragically lost a young seven year old daughter, Johanna. The father had burned a back fire around this buildings to avoid being burnt out by the ravages of a prairie fire and the young girls dress brushed against a smoldering bush and caught on fire. She was burnt badly and died shortly thereafter in 1878. An emotional account of this event is described in the book The Story of Sioux County by Charles Dyke. She is believed to by the first person buried in the Sioux Center Cemetery. The Koster family endured the same trials as did their fellow settlers, fire, grasshoppers, weather and epidemics.

The Koster family worked the next few years building a farm out of the prairie. A row of cottonwood trees were set out that were a part of the main street of Sioux Center for many years, that last huge specimen succumbed at the site of the Central Park in the 1970s.

The family, Jacob and Maartje with children; Jan John, Jannetje Jane, Betje Betsy, Gerritje Gertie, Maartje, Hendrika Hattie, Geesje Lizzie, and Johanna joined the only church in the area, the Reformed church of Orange City on June 19, 1872. Prior to that Mr. Koster was sort of the religious leader of the group holding services in the homes of the settlers. As the settlement of farmers increased in the area a need was felt to organize a church in the Sioux Center (then called West Branch) area. In 1877 a church was organized with the help of a few such ardent Dutch settlement leaders as was the elder Jacob Koster.

Although the underlying reasons are unknown, it appeared that by 1882 the strongly independent nature of Jacob Koster caused separation of ideas in the direction of matters progressing in the growing church, and as a result, Jacob Koster withdrew from the church.

As was recorded in Mrs. Jacob Kosters obituary in the Sioux Center News of April 6, 1924, shortly after this religious rift, in 1885 the family rented their farm out and moved to New Holland, South Dakota, where their son John Koster had a farm. Shortly after that they moved to East Olive, Michigan and lived there until the death of Jacob Koster in 1890.

Some of the older children had married in and about the Sioux Center area and remained there when their parents left for South Dakota and Michigan. These were the John Mouw family, the Peter Mouw family, the Herman Kiel family and the Peter Niemantsverdiet family.

In 1892, Mrs. Jacob Koster came back to Sioux Center after selling her farm in Michigan, and came to live with her daughters family, Mrs. Herman Kiel. She then joined the Kiel family as members of the Christian Reformed church in Sioux Center. She died April 1924 and was buried next to her young daughter, Johanna, who so many years before lost her life tragically in a fire that consumed her dress as she brushed against a burning bush.

Although it was hard to trace the descendants of this family who have scattered all over this country, the following is an account of the children of Jacob Koster and those believed to be their grandchildren. The children are not in the order of birth.

1. Jan John Koster married Kate Sienams. Kate was born in Illinois and lived at Hastings NE, then at New Holland SD, where she met John Koster who was farming there. After John and Kate were dried out in South Dakota for a few years they moved to Kanowa , Iowa and there it was much too wet ofr a few years. The decided to come back to northwest Iowa and settled at Sanborn. Their children were Jake Koster, Will Koster, Marie (Mrs. Nick Donkersloot) and Maude (Mrs. Van Kley).

2. Jannetje Jane Koster married John Mouw. They resided in the Orange City area for a few years being recorded there as members of the First Reformed church. They were recorded as living n Los Angeles, CA in 1924. Their children are believed to be: Anna, Leona (Mrs. De Kraai) Johanna, Jake, and Niel.

3. Beertje Betsy Koster married Peter Mouw. They farmed near Orange City. They had one daughter, Johanna Anna (Mrs. Stephen De Jong). She is the grandmother of one of the authors of this story, Liz Den Herder.

4. Gerritje Gertie Koster married Peter Niemantsverdiet. They were from Maurice, IA as recorded in 1924. They had one daughter, Annie (Mrs. Henry Kooi) and a son Henry single.

5. Maatje Koster married John Mulder and when he died she married Gerrit Van Otterloo. They were from Rock Valley IA in 1924. There were two Mulder children: Jake and Gerrit. There were two Van Otterloo daughters; Mary (Mrs. Andrew Van Kley) and Alice (Mrs. Will H. Vugteveen).

6. Hendrika Hattie Koster married Henry Peerbolte. She had a millinery shop in Sioux Center for a while in the 1890s and later they lived in Muskegan MI. They had a daughter, Hattie (Mrs. Bert Poppen). Mr. Peerbolte had come from Kansas, in the Sioux Center area he built barns and windmills as a specialty.

7. Geesjen Lizzie Koster married Herman Kiel of Sioux Center. They were the parents of one son, Dr. Lee H. Kiel who was a medical doctor in Tucson AZ.

8. Johanna Koster 1871-1878 She died as a result of her dress catching fire from a smoldering bush in a prairie fire.

The authors of this story, (Liz Den Herder and Wilma J. Vande Berg) had gathered bits and pieces of information from many sources and have put it together as accurately as possible. 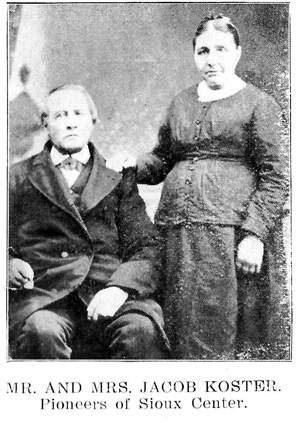