The program honoring Dr. Colenbrander was held in the First Reformed Church where he is credited with a church membership of 440 families, an increase of 212 families since he came to the church.

Groups which have organized within the church took part in the service presenting musical numbers. The Junior Christian Endeavor, the Mission Band, the Sunday School, the Church Choir, the Boys' Choir, the Women's Choir, the Senior Christian Endeavor, the Guild for Christian Service, the Senior Ladies' Missionary Society, the Men's Brotherhood, the Couples' Club and the Consistory took part in the service, each contributing to the tribute paid to Dr. Colenbrander. The congregation presented to Dr. Colenbrander a gift on the occasion which totaled about $4,600.

The Colenbrander family came to Orange City from Rock Valley where Dr. Colenbrander had been pastor for two years. Prior to his stay in Rock Valley he was a minister in a Reformed church in Sioux City.

Henry Colenbrander is the son of a Dutch immigrant family which settled in Alamosa Valley in Colorado in 1893. Of the seven children in the family four still are living, with the nearest living in Sioux Center. Henry was raised in Patterson, New Jersey, where he attended high school. After graduation he attended Hope College and went on to Western Theological Seminary where he was ordained in the ministry in 1916. From Hope, Rev. Colenbrander received his doctorate in 1945. Rev. Colenbrander married Fannie Kooiker of Overisel, Michigan in August of 1916.

The Colenbranders have four children, Rev. Harold Colenbrander of Sheboygan, Wisconsin, Paul Colenbrander, Northwestern College coach, and Mrs. Harold (Elizabeth) Paekel of Orange City; and Mrs. Arnold (Francis) Vermeer of Sioux Center. All the children and their families were home to commemorate with Dr. Colenbrander and the First Reformed Church members the years he has spent in Orange City.

When asked about his observations of the changes in Orange City Dr. Colenbrander mentioned the coming of the Tulip Festival which has since become an annual event. In the way of new additions to the city, he recalled that the new public school was built following a fire which destroyed the old building. He noted the expansion of Northwestern College, mentioning the building of the new girls dormitory, the addition to Science Hall, the auditorium and just recently the men's dormitory which has been named Colenbrander Hall in honor of the Colenbrander family.

With the coming of Dr. Colenbrander to the First Reformed church came also the introduction of the English language into the church. The church remained bi-lingual until all services were changed to the English language. Dutch prayer services still are conducted every other week.

During his pastorate in the First church, Dr. Colenbrander preached 3,650 sermons, with a total of 1,820 prayer meetings in addition. Infant and adult baptisms over the 35 year period numbered 839; the number received on confession of faith, 842; and the funeral services for departed members numbered 490. He performed marriage ceremonies for 295 couples.

Members entering the ministry, a mission field or other full-time Christian service from Dr. Colenbrander's congregation have numbered 29. Through the same period of time, a total of $1,410,973 was given by the church members to local and denominational causes as a measure of stewardship.

(The article includes a photograph.) 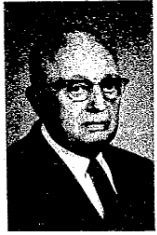