This biography was compiled by Wilma J. Vande Berg of the Greater Sioux County Genealogical Society and taken from various identified sources. Purpose was to find as much about the Nicholas Ludowese family as is available in local sources. When family information is taken from various sources it is often found that the information varies from one source to another. Often birth places and dates are listed differently by various family reports. The information in this biography was stated as found in the source addressed.

RESEARCH NOTES: From a report on public member trees on ancestry.com, which was submitted by other related members and not verified by this compiler.
Nicholas Nic Ludowisi/Ludowese/Ludowisse was born 3 Mar 1821 Syren Canton de Luxembourg Luxembourg. And died 22 Jun 1913 Hospers, Lynn Tsp. Sioux County IA. He was the son of Bernardus Ludovisi 1784-1856 and Maria Catharine Poncin 1782-1838. Nicholas married Therese Rosalie Schloesser on 16 Oct 1844 Dudelange Esch Sur Alzette Luxembourg. Therese was the daughter of Michail Schloesser 1794-1867 and Catherina Weber 1794-1856. Their is a picture of both Nicholas and Therese on the ancestry.com web site.

CHILDREN: of Nicholas and Theresa

Are #3. and #4. the same person? #3 is not mentioned in immigration, #4 is. Both died Nov 1900. If anyone can identify the Child #3 and #4 further contact our page coordinator. There are quite a confusion with No. 3 and No 4 child listed below . The immigration record lists no second Maria Louise born abt 1850, but does list a Maurice Ludowisi both born abt 1850, and both died Nov 1900.

XX4. MAURICE LUDOVISI He/She was born 24 Sep 1850 Syren, Luxembourg (not a Primary source) died Nov 1900 Alton IA Source  was listed as a child of Nicholas and Theresa Ludowese in a public member tree on ancestry.com and also listed in the immigration record as 14 years in 1864. This child is not mentioned in the 1870 census. He/She was not found in the 1880 census. . No death record found, he is not mentioned in other family obituaries as a child or a sibling. Conclusion is that No. 3 and No, 4 are one and the same person an error in the immigration record.

5. NICHOLAS LUDOWISI born 22 May 1851 Dudelange, Canton dEsch Sur Alzett, Luxembourg died 23 Jan 1917 Steward, McLeod Co., MN. Wife was Mary Jungers 1865-1931, married 14 Dec 1880 Dacada Shelboygan WI. They lived most of the time at Hospers IA. Nicholas was buried at Hospers IA. Only one child was named in the report as Sister Catherina Cecilia Ludowese 1886-1952. Nine children listed in obit information that follows: Ludowese, Nicholas born 21 May 1851 died 23 Jan 1917 at Stewart MN and was buried in St. Anthonys cemetery Hospers IA (WPA record) Also known as Ludowisi. Note: With the report on ancestry.com (by others) was an obit of Nick Ludowese source not determined , presumed to be a newspaper at Stewart MN. Nick Ludowese answers call. Succombs after Brief Illness of Diabetes at the age of 65 years.
The people of this village and community learned of the death of one of its prominent citizens Tuesday morning. Death occurred at 8 oclock.It was the writers good fortune to have known him long and will, and we only know him to esteem him highly as the years passed by. He was a devoted husband and a king and indulgent father. He was a true Christian and faithfully believed in the God Almighty. Mr. Ludowese was born in Luxemburg Germany on May 21, 1851. He immigrated to this country and was married on Dec 14, 1890 to Miss Mary Jungers of Durada WI. After his marriage he took his devoted and loving wife to Hospers IA where they made their home on his farm until 1914, when they moved to Stewart and where they have made their home since. Funeral services were held in the St. Boniface Catholic church at this place Thursday morning at 9:30. Services were conducted by Father Mise. The body was taken from the church that afternoon and shipped to Hospers IA where services and burial will be made today at 10 am. His living wife and many relatives accompanied the body to that place. He leaves to mourn his death besides his loving wife, three sons who are N. B. of Williston ND, D. A. of this place and John of Hospers IA, and six daughters Mrs. J. V. Maiers, Mrs. P. A. Maiers, and Miss Magdelen of this place and Mrs. Alfred Laresh of Ashton SD, Mrs. H. P. Decker of Hospers IA and sister M. Theresia of Sacred Heart Academy of Fargo ND.
5. PAULUS LUDOWISI born 22 Aug 1853 Dudelange, Canton dEsch Sur Alzette, Luxembourg and died 10 Aug 1934 Wheaton, Traverse, MN. Married 19 Jan 885 Alton, IA Wife was Katherine Lewis 1858-1929. Eleven children listed on public member trees ancestry.com

6. KATHERINE LUDOWISE born 1855 died Feb 6, 1933. Her obituary follows: Source: Alton Democrat (2-17-1933) Born: 1855 Died: February 6, 1933 SCHWEBACH FUNERAL HELD WEDNESDAY--WAS PIONEER AT GRANVILLE Mrs. Catherine Kate Schwebach, early pioneer of Granville, passed away at the home of her son, Nick Schwebach, two miles west of Granville on Monday morning, February 6, 1933, at the age of 77 years, 2 months, and 11 days. Deceased was ill for several months spending a few weeks in a hospital at Canby, Minnesota, and died as a result of diabetes and pneumonia. Catherine Ludowisi was born at Besson, Luxemburg, in 1855. In 1863 she came to the United States with her parents, Mr. and Mrs. Nick Schwebach [Ludowisi], and settled at Escanaba, Michigan. Later the family moved to a farm near Alton. At the age of 16 years she was united in marriage to Johan Schwebach of Caledonia, Minnesota and to this union seven children were born namely: Mrs. Nick Bertemas, Nick, Peter, John, Theodore, James and Louis. Her husband preceded her in death 20 years ago. Besides her children she leaves to mourn a brother, Paul Ludowisi of Wheaton, Minnesota; a sister, Mrs. Lou Jungers of Sheldon; 47 grandchildren and 11 great-grandchildren. Mr. and Mrs. Schwebach were among the earliest residents of this community. The latter lived in her present home 61 years. She was a member if St. Josephs Catholic Church and of the Christian Mother Society. Funeral services were held on Wednesday morning at 9:30 oclock, Reverend Illg officiating. Interment took place at St. Josephs Cemetery. Pallbearers were six grandsons, as follows: John, Joseph and William Schwebach of Granville; Theodore Schwebach of Alton; Cyril and Mark Schwebach of Minneapolis, Minnesota.
6. MARGARET MAGGIE LUDOWESE 8 May 1859 Eischen, Hobscheid, Capellen, Luxembourg and died 2 Jan 1948 Sheldon, Iowa She married Louis Ludwig Youngers 1853-1936 They were the parents of some fourteen children.

7. THEODORE LUDIWISI 1861-1894 From the Alton Democrat of Jul 7, 1894
Theodore Luduwisse (aks - Ludowese etc.) died of consumption at his home near Hospers, on Jun 20, in the 33rd year of a useful life. His wife and three children survive him. About 8 years ago he was injured by a horse which fell upon him, and his decline continued from that time. He has resided in Alton and near Adrian MN, since his marriage and the funeral which was held at Hospers on Thursday was very largely attended. He was a popular young man, and christian, with warm friends everywhere and his death, at his age in life, was a cruel blow to his family and parents. The Democrat unties with the whole community in extending sympathy and condolence to the afflicted ones.
(From an account on ancestry.com He was born 9 May 1861 in Bissen Mersch Luxembourg, died 20 Jun 1894 Hospers IA. Married 1889 to Margarite Trierweiler 1857-1942 at Hospers IA. Their three children were - Theresa K, 1890-1955, Nicholas 1892-1950 and Mary 1894-1967.)

OBITUARY of Nick Ludowse Sr. 1821-1913 Source: Alton Democrat issue of 28 June 1913. OLD SETTLER PASSES ON Early Sunday morning June 22nd Nick Ludowese Sr., one of Sioux county's oldest residents and one of her earliest settlers, joined the great silent majority. The infirmities that come with extreme old age, caused the death of the old gentleman. Deceased was born in Syren, Luxemburg, Europe, on March 3rd, 1821, and was therefor 92 years of age when he passed away. He came to America in 1866 and for five years worked in the lumber camps of Michigan. In the early seventies he came to Sioux County and homesteaded on a quarter section a few miles northeast of Alton. His wife died a number of years ago and for the last number of years the old gentleman made his home with his son Nick, near Hospers. "Old man Ludowese" as he was familiarly called by the old residents, was a good old man. In the early days he was ever ready to help his neighbor and his help was often called for. He was a devout Catholic and had much to do with the organizing of the early Catholic churches of this community. The funeral services were held on Tuesday in St. Mary's church at Alton and interment was made in St. Mary's cemetery at Alton. Very Rev. F.J. Brune conducted the services. A large concourse of old neighbors and friends, from towns in this vicinity, attended the funeral which was a large one. Deceased is survived by two sons and two daughters--Nick of Hospers, Paul of Buffalo Lake, Minn., Mrs. John Schwebach of Granville and Mrs. Lewis Jungers of Sheldon. same issue--Alton column.
The body of N. Ludowese Sr. was brought here Tuesday for burial. Services were held at St. Mary's and interment was made in St. Mary's cemetery. Very Rev. F.J. Brune had charge of the services. N. Ludowese at one time lived on his homestead a few miles northeast of Alton and was well and favorably known to all the old residents of Alton.

OBITUARY of Theresa Mrs. Nicholas Ludowisse From the Alton Democrat of Mar 6, 1897
Death of Mrs. Ludowisse
Last Wednesday evening at 8 o'clock occurred the death of Mrs. Nic Ludowisse at her home in this city. The deceased was in the seventy- sixth year of her life and was well known throughout the county she and her husband being among the pioneer settlers. For the past three years she had been an invalid and during that time she bore her sufferings patiently.
All that loving hands and medical skill could do to restore her to health and relieve her sufferings was done but to no avail and on Wednesday evening she was called to that bourne where suffering and pain are no more.
Besides her husband she leaves six children to mourn her loss, Mrs. Nic Reiter and Mrs. Peter Wagner of this city, Mrs. J. P. Schwebach of Granville, Mrs. L. Youngers and Paul of Sheldon, and Nic of West Branch, Iowa all of whom were present at the funeral. The funeral was held from
St. Mary's church (this) Friday morning at 10 o'clock, Rev. Father Brune officiating, interment in Catholic cemetery.

This picture of Nicholas and Teressia was lifted from a family report on ancestry.com submitted by other family members. 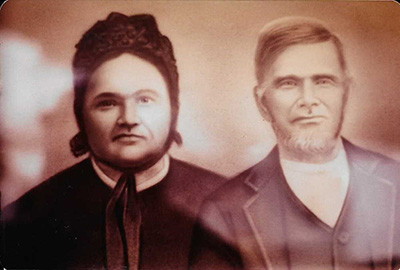