This biography was compiled by Wilma J. Vande Berg of the Greater Sioux County Genealogical Society and taken from various identified sources. Purpose was to find as much about the Peter Wagner family as is available in local sources. When family information is taken from various sources it is often found that the information varies from one source to another. Often birth places and dates are listed differently by various family reports. The information in this biography was stated as found in the source addressed.

RESEARCH Notes: From a family report on ancestry.com where public member could enter their family trees, found family information. Some information was in error. From this report and local sources will create the family profile.
Peter Johan Wagner was born 2 Aug 1838 Luxembourg died 27 Dec 1910 Alton IA. Married July 2, 1866 or 20 Jun 1866 at Escanaba, Delta Michigan. [Parents (questioned by the compiler of this BIOS) as in the ancestry report were listed as Nicholas Wagner 1810-1885 and Angeline Fishbach born 1810 Luxembourg died bef 1840 family came in 1840s] In Peters obit it states he came to USA in the 1860s and was first in the Chicago area in 1870. There were many Peter Wagners who came to the USA in the mid 1860s. In Find a Grave his parents were listed as Nicolas and Marie Wagner but that could be a copy of other ancestry reports.
Mary Ludowisse was born 23 Jul 1845 Dudelange, Esch Sur Alzette, Luxembourg died 14 Nov 1898 Alton IA. A separate ancestry family report has pictures of Nicholas Ludowisi and Theresse Schloesser. Along with daughter Maria Mary born 23 Jul 1845, who married Johan Peter Wagner. Maria Mary Louise Ludowise was the daughter of Nicholas Ludowise born 3 Mar 1821 and died 33 Jun 1913 Hospers, Iowa and Therese Rosalle Schloesser born 13 Apr 1822 and died 3 Mar 1897 Alton, Iowa.

CHILDREN: of Peter Wagner and Mary Ludowisse
1. THERESA WAGNER born 20 Oct 1869 Escanaba, Delta, MI died 21 Apr 1921 Hospers, Sioux Co. IA. In place of an obit recorded on web site - Neuroth, Theresia W. born 1869 died Sep 20, 1920 buried in St. Josephs cemetery Granville IA.
No death notice or obit was readily found in the Alton newspaper. Note: an ancestry.com report (by others) Theresia Wagner was born Oct 20, 1869 in Granville IA. She married Anton Neuroth in 1908 at Hospers IA. They had one child during their marriage, She died April 21, 1921 at Hospers IA. Age 51. She was the second wife of Anton.

1905 census of Sioux county Peter Wagner was born abt 1839 Germany, was widowed.

OBITUARY of Peter Wagner 1838-1910
Source: Alton Democrat of 31 Dec 1910
Peter Wagner died at the home of his son Andy at Ralph South Dakota Tuesday December twenty-seventh of pneumonia. Peter Wagner was born in Luxemburg Europe August third 1838. He came to the United States in the sixties and made his first step in Chicago. Here he shipped out on lumber camps and mills of that section of the country for several years. On July second 1866 he was united in marriage to Miss Mary Ludowese a daughter of N. Ludowese and on May nineteenth 1870 Mr. and Mrs. Wagner came to Sioux county taking a homestead between Alton and Granville. Mr. Wagner was one of the first settlers. When the first mass service in Sioux county was celebrated in Kilburg's store in Alton, then called East Orange, October third, 1873 when Frank Koob was baptized, Peter Wagner acted as server and N. Nemmers and N, Koob were chanters. Eleven children were born to Mr. and Mrs. Peter Wagner, ten of whom survive the deceased. Mr. Wagner was a prosperous farmer and highly respected. He had always been active in the up-building of the Catholic church and school and has always been one of its devout and faithful members. About a year ago when Andy Wagner and his two sisters Misses Leona and Jennie took up claims near Ralph South Dakota, Mr. Wagner went with them and made his home with them. He passed away last Tuesday and the remains were brought to Alton for burial. The funeral services will be held this Saturday and will be conducted by Very Rev. F.J. Bruse and interment will be made in St. Mary's cemetery. The surviving children are Mrs. Tony Neuroth of Granville, Mrs. A. C. Mumm of Hoven South Dakota, Nick of Uniontown Washington, Mrs. Chris Weidenfeller of LeMars, Theodore of Alton, Mrs. Mike Allen of Orient South Dakota, Miss Lena of Ralph South Dakota, Peter of Dell Rapids South Dakota, Andy and Miss Jennie of Ralph South Dakota. One brother Bernard and a sister Miss Mary residing in Luxemburg Europe also survive the deceased. All the children will attend the funeral services with the exception of Nick of Uniontown Washington. It will be impossible for him to reach Alton in time. The funeral serv9ices will be held at ten A.M.

OBITUARY of Mary Mrs. Peter Wagner 1845-1898 Alton Democrat of Nov 19, 1898 page 5 Death of Mrs. Peter Wagner.
Mrs. Peter Wagner, one of the early settlers of the county, passed peacefully away at her home two miles east of town, last Monday morning after a lingering illness. Mrs, Wagner was stricken with paralysis on April 6th, 1896, and has been a helpless invalid ever since. She bore
her suffering with fortitude, realizing that her illness was but a question of time, when death would carry her to that bourne where sickness and sorrow are no more.
The deceased, nee Miss Mary Ludowisse, was born in Biringen, Canton,Ash, Luxemberg, July 23rd, 1845, and was fifty-three years of age at the time of her death. In May,1864, she came to this country with her parents and settled in Port Washington, Wis. They remained here but a short time when they removed to Escanaba, Mich. On June 30th, 1866, she was united in marriage with Peter Wagner, at her home in Escanaba. Eleven children were born to them, five sons and six daughters, all of whom are living except the eldest son who died in infancy.
On October 15th, 1869, Mr. and Mrs. Wagner moved to St. Donatus, Iowa, where they resided until their spring of 1870, when they came to Sioux county and purchased their homestead east of town. Deceased leaves to mourn her loss besides her husband, her sons, Nicholas, Theo., Peter and Andrew, and daughters, Theresia, Catherina, Mary, Appolonia, and Johanna of this city, and Mrs. Chris Weidenfeller of Dalton; her father, Nicholas Ludowisse, and sisters, Mrs. Nic Reiter of this city ; Mrs. John Swebach of Granville, and Mrs. L. Youngers of near Hospers, and brothers, Paul and Nic Ludowisse, jr., also of that place, all of whom were present at her bedside when she died. She was an affectionate wife and a kind and devoted mother, and during the years of her health she labored industriously and with the united efforts of her husband and eldest children, they have acquired one of the finest homes in the county. That she was appreciated and beloved also by her neighbors and friends, was evinced by the large number who gathered from far and near to pay a final tribute to her memory.
The funeral was held from St. Mary's church in this city last Wednesday morning, conducted by Rev. F. J. Brune, and was attended by a large concourse of sorrowing relatives and friends. Interment in St. Mary's cemetery.
THE DEMOCKAT sympathizes with the bereaved family and friends.
Among those who came from a distance to attend the funeral we noticed the following: Nick Wagner of Vilas, S. D., Mrs. John SiHen of Hartford, S. D. ;,Mr. and Mrs. Chris Weidenfeller, Fred Fischbach and Mrs. John Weidenfeller of LeMars; L. Youngers and family of Sheldon ; John and Joe Wagner of Archer Grove; Nic Ludowisse and family,
Paul Ludowisse, Nic Gillen, Mr. and Mrs, Peter Youngers, John Decker, Mr. and Mrs. Nic Perry, Mike Youngers and daughter, Anna, Nic Youngers and family, Dominick Youngers, Henry, John, and Joe Remade, Mr. and Mrs. Dominick Wagner, Mr. Meyers and Peter Reiter of Hospers ; Nic Bertemus, Peter Bucholz, Mrs. Joe Benardia, Mr. and Mrs, John Swebach, Geo. Wagner, Mr. and Mrs. Peter Fischbach, John Eulberg, and Antone Neuroth of Granville; Nic Schleser and daughter, Susie of Struble.

This picture of the Johan Peter Wagner family was lifted from the ancestry.com family reports. 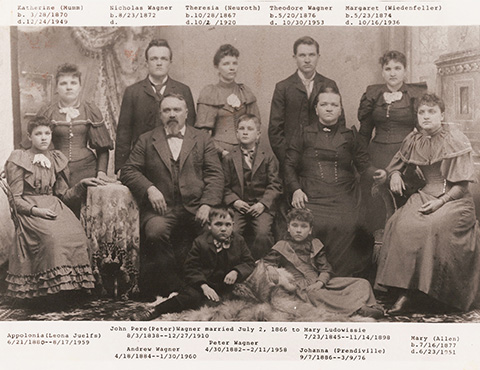