This biography was compiled by Wilma J. Vande Berg of the Greater Sioux County Genealogical Society and taken from various identified sources.

ALTON ST. MARYS CHURCH BOOK page 134 has a family report on the Nicholas Nemmers family.
Nicholas D. Nemmers was born in Luxembourg, Sept 12, 1845. He was in St. Donatus Iowa. In January of 1870 although the exact arrival date in America is unknown, On May 2, 1870, Nicholas and sixteen other men headed for Northwest Iowa traveling by eighteen oxen drawn covered wagons, passing through Waterloo, Fort Dodge, Storm Lake, Cherokee, and Le Mars. They arrived on May 19. all these pioneers were Catholics of Luxembourger ancestry. Since there was no town where these people settled, they journeyed to Le Mars for Sunday mass.
In 1873 Nicholas returned to St. Donatus to marry Anna Kaiser and immediately brought his bride to Northwest Iowa. Anna was born at Olm, Luxembourg, on Dec 25, 1852, she is the daughter of Hubert and Barbara Ehlinger Kaiser. A sister, Josephine was born at Olm on Oct 24, 1854. The Kaiser family emigrated to St. Donatus in the early spring of 1870.
Nicholas and Anna had six children ; Peter, Hubert, Josephine, Abigail, Catherine, and one buried in St. Marys Cemetery who died in infancy. Nicolas died March 24, 1882, and is buried at Le Mars. Anna continued farming and in 1884 married Anton Huss. Anna Nemmers Huss died Jan 18, 1920. Services were at St. Marys with burial at Le Mars.

RESEARCH from public member tree of Ancestry.com ,family information submitted by others. (not verified by the compiler of this biography).

3. Josephine Nemmers was born 25 May 1877 and died 15 Jun 1918
From the Alton Democrat, June 22, 1918: Death of Mrs. Henry Kokenge. Mrs. Henry Kokenge passed away at the LeMars Hospital on Saturday, June 15, the cause of her death being goiter trouble. Mrs. Kokenge was born on the farm east of Alton on May 25, 1877 and so by the time of her death was 41 years old. In 1897 she was united in marriage with Henry Kokenge, to become a real mother for his motherless children. This marriage was blessed with ten children, of whom two died. Besides her husband, she leaves to mourn her loss, twelve children, John Kokenge of Granville, Anton Kokenge of Orient, S.D., Ernest Kokenge of Alton, Mrs. Clem Full of Taunton, Minn., and eight children at home: Joseph, Dorothy, Francis, Alfred, Alois, Cyril, Edna, and Marina, the youngest being only three years old. The deceased is survived by her parents, of whom Mrs. Huss is living at Alton, and six brothers and two sisters. Mrs. Kokenge was a woman highly esteemed by her friends, loved by her family and was a faithful member of the Church. The whole community sympathizes with the bereaved ones in their great loss of mother and wife, daughter and sister. Funeral services were held on Tuesday June 18 at the Catholic Church, Very Rev. Father Brune officiating. An unusual[ly] great number of friends and relatives attended the funeral. Those present from a distance were: Mrs. Peter Nemmers, Fulda; Mrs. Joe Hoefer and Leonard, Mrs. A. Hoefer and Mrs. Henry Burlage of New Vienna; John Drees and Mrs. Joe Schindler of Dyersville; Mrs. Grimm of Wisconsin; Mr. and Mrs. Joe Huss, Ashton; Mr. and Mrs. Ted Huss and Mr. and Mrs. H. Nemmers, Miranda, S.D.; Mr. and Mrs. A. Kokenge and family, Orient, S.D.; Mr. and Mrs. Charles Nemmers, Le Mars; Mr. and Mrs. John Nemmers, John Kemp, Mrs. Math Kemp and Margaret and Anna Kemp.

5. Appolonia Nemmers was born 18 Apr 1880 and died 9 Arp 1939 1938
From the Alton Democrat, April 15, 1938: Mrs. Demuth Former Resident of Alton Mrs. Bert Demuth of Woodstock, Minn., long a resident of the Alton community, died Saturday night [April 9], according to news reaching relatives here. She was the former Appolonia Nemmers and attended school here. After her marriage to Mr. Demuth she lived in this vicinity for several years before the family moved to Woodstock. She was nearly 59 years of age and is survived by her husband and seven children besides a sister, Mrs. Nick Welter of Woodstock, a brother, Hubert Nemmers of Mitchell, S.D., and several half brothers, including Nick Huss of Alton; Ted Huss of Faulkton, S.D.; Joe Huss, Ashton and Matt Huss, Fairmont, Minn. Alton relatives who attended the funeral services at Woodstock Wednesday morning were her brother, Nick Huss, and the Misses Susan and Mary Hoxmeier, cousins of Mrs. Demuth. The Misses Hoxmeier accompanied Mr. and Mrs. J. W. Nemmers of Le Mars to Woodstock. The Kokenge family here are also cousins of Mrs. Demuth, who was a sister of the late Mrs. Henry Kokenge.

OBITUARY of Anna Nemmers Huss
Sioux County Iowa cemetery listed, Nemmers, Anna nee' Keiser (Kaiser) 1852-1920 husb Nicholas St. Marys Cemetery Alton IA (WPA record) Her burial place as St. Mary's is questionable as obit states buried in LeMars.
Alton Democrat of Jan 31, 1930 Pioneer Resident Passes on.
Mrs. Anna Huss a pioneer resident of Alton Passed away suddenly at 12:30 a.m. Jan 28th from heart failure at the age of 67 years. Mrs. Huss was enroute home from Minneapolis, where she had gone for medical treatment, and died on the train just before reaching Mankato.
Mrs. Huss homesteaded in Sioux county in 1873 and is on of the earliest pioneers of this section. Her family has the sympathy of the entire community in their loss. Mrs. Huss was born in Luxemburg on Dec. 25th 1842 and came to the USA at the age of 14. In 1873 she married to N. D. Nemmers at St. Donatus IA, and the couple took up a homestead near Alton.
Six children were born to them. Of these, one died in infancy a son, Peter Nemmers, died two years ago and the oldest daughter, Mrs. H. Kokenge, passed away in June 1918. Mr. Nemmers died in 1882 at Alton and was buried in St. Josephs cemetery LeMars.
In Sept 1884 Mrs. Nemmers was married to Anton Huss. Mrs. Huss is survived by seven children: Hubert Nemmers, Miranda SD: Mrs. Demuth Lismore MN; Mrs. N. Weiter Woodstock MN; Theo Huss, Faulkton SD; Joe Huss Aston IA; Nick and Matt Huss of Alton; and by one sister Mrs. Mat Kemp of LeMars. Mrs. Huss lived on the original homestead until two years ago when she came to town.
Funeral services will be held in Alton At St. Marys church at 8.30 Saturday Morning and interment will be in LeMars at St. Josephs cemetery.

The picture of Nicholas Nemmers was with the family story in the St. Marys Church book page 134. 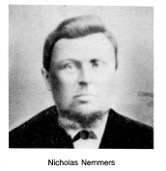