This biography was compiled by Wilma J. Vande Berg of the Greater Sioux County Genealogical Society and taken from various identified sources.

RESEARCH  From a family report on ancestry.com submitted to public member trees by others, other than the compiler of this biography.

In search of Justinas parents, found the 1870 Census of Humboldt County IA. As is typical the inconsistancy of the information shows there may have been some errors. The family of Charles Koob 70 born Holland (Luxembourg) and wife Alice 60, were living at Rutland, Humboldt County IA. Seems coincidental that they had a Justin (male) age 17, (possibly recorded wrong a female), other children were Frank19, Margaret 19, John 15, Katie 12, Annie 10 Shortly after this census in 1870 Justina married Frank Arens 20 Feb 1871 at Fort Dodge Humboldt County Iowa. Also, Justina was reported to have been born in Luxembourg in the ancestry report, this Koob family in the 1870 census came from Holland (error) . However in the 1880 census of Rutland, Humboldt, Iowa, Charles Koob age 80 born Luxembourg, was the father of Katrena Katie Koob Mrs. Charles Wagner age 22. She was born abt 1858 in Luxembourg. With the 1880 census affirming the birth places as Luxembourg, the 1870 census family have to be one and the same.

CHILDREN of Frank and Justine Arens from the public members tree report on ancestry.com information not verified by compiler of this biography.

ALTON CENTENNIAL BOOK pages 7 and 70. Churches of Alton  St. Marys Church. On May 20 1870 a band of prairie Schooners arrived in eastern Sioux County from Jackson county Iowa. The members of this band of hardy Germans and Luxemburgers were the nucleus of what later became St. Marys Roman Catholic Church Parish of Alton Iowa. The article mentions many names for the early settlers and also includes Frank Arens.

OBITUARY Arens, Frank (Franz) 1844-1887
Franz Arens obituary from the LUXEMBOURGER Gazette July 26, 1887 page 5. As translated by: Jean Ensch
The following is taken from the 21st July issue of the "Le Mars Herold" With deep regret we have to report the death of Franz Ahrens [Arens] residing in Plymouth County as of this year. He died at the age of 42 years and 11 months. Ahrens [Arens] was born in Olm, Grand Duchy of Luxembourg and came to Amerika in 1851 with his parents, where they settled in Jackson County, Iowa. In the year 1870 [1872] he married Miss Justine Koob from Angelsberg, Grand Duchy of Luxembourg, and in the same year made his new home in the vicinity of Alton in Sioux County, where he was active together with his family until last spring as a hardworking and peace loving farmer. When the terrible disease, cancer, started to undermine his vitality at the best age, he figured it would be better, to sell his old home and, for the best of his family, move into the vicinity of the town of Remsen in the neighborhood of his relatives. The uncurable disease made rapid progress and after close to two years ailing he was delivered by death, which he had faced a hundred, even a thousand times. A wife and six children, three boys and 3 girls mourn the too early departed and loved husband and father. His remains were laid to rest on Saturday at the Catholic cemetery of Remsen. May he rest in peace.

No obituary was found for Juntine Mrs. Frank Arens  Hentges. The picture was captured from the ancestry.com report . Back  Appollonia, Matt, Cecilia, Front  John N. Justina and Nicholas. 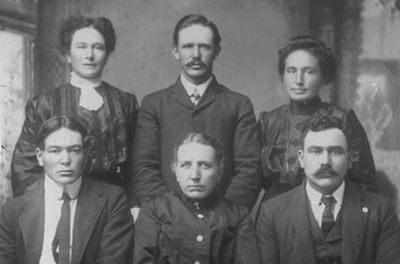