The McKeever House
This story was taken from pages 349-350 of the Ireton Centennial Book (1882-1982). The story was transcribed for this BIOS by Beth De Leeuw of the Greater Sioux County Genealogical Society. Some research notes were added.

One of the landmark buildings in Ireton was the large house built on the extreme western side of Ireton by an Ireton banker, Mr. H.F. McKeever, at the turn of the century, when economic times were very good and prospects looked good for the country as a whole and Ireton in particular. Plans were being laid for a proposed Sioux City to Sioux Falls Interurban Railway which was to pass through the field just to the west of Ireton in Sec. 7, (between the present edge of town and the Donald Van Wyhe farm) then curve back to a point directly south of the ½ mile road, which divides the Kluter and Bertram pastures where it would have intersected with the N. & N.W. R.R. Line, and then straight north.

Mr. McKeever saw a good investment possibility and a chance of an Ireton Boom, so he bought an undeveloped parcel of land on the west edge of town, divided it into streets and lots, and saved the prime spot on the knoll for himself.

It was imposing, to say the least, and it contained many innovative features, such as a ducted forced air furnace and a bathroom with overhead storage for heated water for bathing purposes, and the first built-in tub in Ireton. He also constructed a horse barn and other outbuildings there.

Mr. McKeever sold the house to Mr. and Mrs. M.M. Elder, who retired there.

Ownership passed to Wm. And Lou Twillman, who lived there for many years while they operated their dairy business on the surrounding acreage.

Mr. and Mrs. Peter Feenstra were the last occupants of the grand old house, which had begun to show its age. After Mrs. Feenstra died, Mr. Feenstra moved to a retirement home and the house was abandoned. It was torn down by the present owner of the property, Calvin Bootsma.

Pictured here is the Mc Keever house as it looked when M. M. Elders (pictured) lived there in 1910. 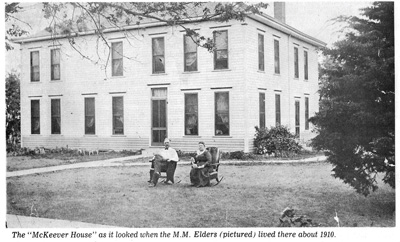