This story was taken from page 170 of the Rock Valley St. Marys Catholic Church Book written for the centennial of the church in about 1982(?). The story was transcribed for this BIOS by Beth De Leeuw of the Greater Sioux County Genealogical Society. Some research notes were added.

JOHN VANDEMORE was born in Belgium April 19, 1842. All that is known about the family is sketchy. He and a brother Mike were abandoned on the court house steps when Mike was seven and John was nine. How they survived is also very sketchy. They slept in barns which were well built and warm at that time. In those days the rich would bake bread for their horses and these two orphaned boys would steal bread from the barns. At some point John was able to find a job washing horses, buggies, barns, etc. The two little boys survived somehow and stayed together. As time went on John got a job either in Germany or France and he would walk to work. There was a serious outbreak of cholera in that part of Europe. John got another job with some government agency to search the country side for people who expired. His job was to bury the families that had died. He would find people in barns, basements and outdoor toilets.

He eventually secured enough money to book passage to America for himself and his brother, Mike. Upon arriving in New York for some unknown reason the two young men were separated but were reunited in Atkinson or Alton, Illinois as they knew someone there. John secured a job for room and board and eventually received $20.00 a month. After he started farming he sent for MARY DENEVE in Belgium. After she arrived in Illinois, the two were married in the Catholic Church in Geneseo, Illinois on October 26, 1877. He and his family moved to Rock Valley, and St. Marys Parish in 1898. They moved to the farm two miles east of Rock Valley. Mr. VandeMore cleaned out the stock yards in Rock Valley the first winter with a wagon. Eggs brought 1 cent per dozen and they usually walked to town, school and church. They eventually bought this eighty and sent their children to the parochial school at St. Marys. After the family of 13 had out grown this small farm, he sold it and bought the farm now owned by Mr. Kooima one mile west and two miles south of Rock Valley. He later sold this farm and bought the Heneman farm six miles west and four south of Rock Valley now owned by Johns grandson, Clement, also known as Bode. Being devoted Catholics they raised their family and attended church regularly, always placing St. Marys on high priority.

OBITUARY OF JOHN J. VANDEMORE, SR.
From the Thursday, July 15, 1926 Hawarden Independent:
Former Resident Dies in Illinois
John Vandemore Sr., a former resident of this community, passed away at his home in Geneseo, Ill., July 4th, following a short illness of a week's duration. His death came vary unexpectedly as he was feeling better the day preceding his death and remarked that he would soon be well again. He was born in Middleburg, Flanders, Belgium, April 19, 1842, and so was past 84 years of age. He came to America in 1878 and located at Atkinson, Ill., where he lived for a number of years. He was united in marriage with Miss Mary DeVeve Oct. 26, 1877, and to this union thirteen children were born, ten of whom with their mother survive him. He came to Garfield township 28 years ago and lived here for 14 years when he moved back to Illinois with his wife and younger children. Mr. Vandemore was a good citizen and neighbor and made many friends during the years that he lived in this community. The children who survive him are Henry, Ed. and Bruce of Hudson, Mrs. Minnie Tuynman of Winfred, S. D., Mrs. Emma Scholbert of Centerville, S. D., Mrs. Louise Buyse of Atkinson, Ill., John, Mrs. Mary Oberle, Ollie and Joseph of Geneseo, Ill. There are also 20 grandchildren.

OBITUARY OF MARY VANDEMORE
Submitter checked for an obituary in the Rock Valley Bee paper but those few issues at that time didnt survive. However, she was living in Illinois at the time of her death.

Check the obituaries for the Vandemore /Vandermore family members on our website www.iagenweb.org/sioux click obit icon on left side, there abt 23 obits listed under the name Vandemore / Vandermore. Most likely they are all related to the same fmaily.

This picture was taken from the Rock Valley St. Marys Church book page 170. 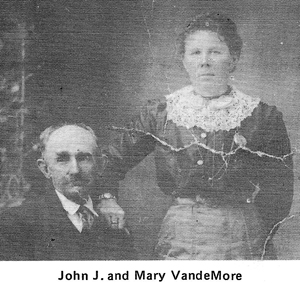