This story was taken from page 133 of the Rock Valley St. Marys Catholic Church Book written for the centennial of the church in about 1982(?). The story was transcribed for this BIOS by Beth De Leeuw of the Greater Sioux County Genealogical Society. Some research notes were added.

HENRY PLATE (1859-1941) and his wife ELIZABETH BUSHMAN (1855-1898) were born near Milwaukee, Wisconsin and later were married there. They came to Rock Valley to live, where he was in several businesses: harness, hotel and others. Two children died in infancy and were buried in the Rock Valley Catholic Cemetery (1890). The two other children were, Eleanor (see Balzer), and Joseph. About 1905 Henry Plate moved to California and later married Clara Rountree, formerly of Rock Valley. They lived in San Diego and were buried there.

JOSEPH was born in 1891 in Rock Valley. As he was seven years old when his mother died, he lived with relatives. He went to California for surveying work, there marrying Eva Golden. After her death, he entered the Army and served in World War I, going to France. In later years he and his wife Pauline lived in California and were buried in San Diego.

OBITUARY OF HENRY PLATE
From the Rock Valley Bee of March 21, 1941
Henry Plate, Well Known Former Citizen, Passes
Henry Plate, well known early Rock Valley business man and horse trainer, died Sunday at hishome in Dan Diego, CA. He was the father of Mrs. William Balzer of Rock Valley ( Eleanore) and of Joseph Plate of Delhi CA, who survive him. His brother, Louis, another early Rock Valley Citizen has passed, as have other members of the Plate family, and Henry was the last to go.
There are a number of nieces and nephews at Burlington and Milwaukee, WI.
Mr. Plate opened a shoe shop when he first came here about 1882 and was later engaged in other business enterprises, leaving here for the Pacific coast in 1906. He built the house which is now the J. H. Kearns residence. The house was quite famous for having 7 outside doorways in those days. It has since been greatly modernized and improved and is known as one of the best built houses in town.
Mr. Plate was 81 years of age at the time of his death. Funeral services were held in Dan Diego Tuesday morning. Mrs. Balzer attended the services for her father and is expected home form California soon.

OBITUARY OF ELIZABETH PLATE
From the Alton Democrat of Apr. 23, 1898 Rock Valley News.
Mrs. H. J. Plate, who has been seriously ill for a long time with a complication of troubles, departed this life on Sunday morning after suffering intensely for some"* days. Her loss will be felt severely by her relatives and friends. She leaves a husband and two children to survive her. The funeral which was held here on Tuesday was very largely attended.
Services were held at the Catholic church Rev . Father Phelan delivering a touching sermon and paying high tribute to the many estimable qualities of the deceased.
(From Ancestry.com account - Elizabeth Bushman b. 8 sep 1855 Wisconsin, died 17 Apr 1898 Rock Valley IA. Husband Henry 1860-1900. Children - Hugo Plate, Elonroa and Joseph.)

The picture of the Henry Plate family taken from the St. Marys Church book. 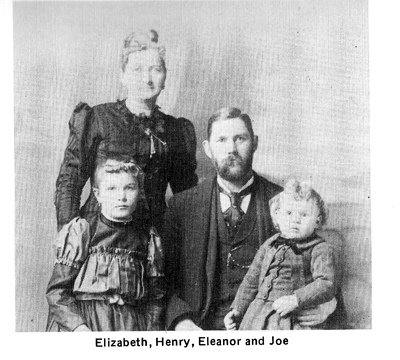