This story was taken from pages 114-115 of the Rock Valley St. Marys Catholic Church Book written for the centennial of the church in about 1982(?). The story was transcribed for this BIOS by Beth De Leeuw of the Greater Sioux County Genealogical Society. Some research notes were added.

JAMES was born in December of 1861 in a small town near Chicago, Illinois. At the time of the great Chicago fire, they could see the flames from their home. At the close of the Civil War, his father was mustered out of the Army and they moved to St. Peter, Minnesota. Later James came to Iowa in 1895 where he met and married MARY KEEGAN. Mary was born in Lyons, Iowa in 1865 to Mr. and Mrs. James Keegan. Her family moved to Iowa in 1886 where they purchased a farm in Lyon County located four miles north and one west of Rock Valley. James and Mary were married in June 1901 by Father Phelan. To this union three daughters were born: Katherine (see Neil Bogaard elsewhere in the book), Anna Mae and Veronica.

CATHERINE was born in Rock Valley, after high school she worked for ten years for Northwester Bell Telephone Company. Her husband Neal Bogaard was a carpenter and worked in various location on construction sites. After his retirement, he was employed for the Iowa State Liquor Commission in Rock Valley store. Neal was a veteran of WWI, passed away in 1977 and is buried in St. Marys Cemetery. They were the parents of tree children Elaine, Donald Patrick and Helen Mary.

ANNA MAE was born on May 1, 1905 and attended St. Marys Academy through the tenth grade. Her advice to the younger generation is to stay in school and graduate. She left Rock Valley in 1932 and moved to Sioux City where she met and married Albert Dorsey In 1935. Albert passed away a year later. In May, 1976, Anna Mae left Sioux City after living there for almost fifty years and moved to Peru, Illinois. She came back to Rock Valley in August, 1981, and lives in the Royal Ridge Apartments.

VERONICA was born in 1907 and after graduation in 1924, worked for Northwestern Bell in Rock Valley, then as Chief Operator in Hawarden, Iowa until 1936. After moving to Chicago, she worked for the Illinois Bell Telephone Co. On June 17, 1940 she was married to Arthur C. Johnson who passed away in 1958. They had two sons, Robert and Philip. Robert E. is now married and has two children, Lori Ann and David, and lives in Downers Grove, Illinois. Philip C., FSC, is a Christian Brother, and for the past five months has been one of three American Brothers representing the United States in Rome. Upon his return in June, he will again resume his duties as Director of the Bishop Gallagher High School in Harpers Woods, Michigan.
Veronica married again in 1967 to Ennio Piome in West Los Angeles. They moved to Hemet, California, a retirement community, in 1980 where they now reside.

(submitter found it interesting That the surname see-sawed back and forth from Laura to Lowery. Birth place varied - Chicago area, Ohio and Minnesota. Father born in W. Virginia or Ireland?

OBITUARY FOR JAMES LOWERY
Source: Alton Democrat (10-16-1936)
Born: December 16, 1861
Died: October 7, 1936
James B. Lowery passed away Wednesday afternoon, October 7, 1936 after an illness of a day of acute indigestion. James R. Lowery was born in Illinois, December 16, 1861, and as a small boy moved to St. Peter, Minnesota, where he passed through many hardships of pioneer life, grasshopper days and the severe blizzard that swept the open country. He worked for a railway company laying ties and also in a lumber camp in the Northern Minnesota woods. He came to this locality forty-one years ago, working for different farmers in this vicinity. He was united in marriage to Miss Mary Keegan, June 5, 1901 in Rock Valley.
To this union were born three daughters all of whom are living: Katherine (Mrs. C.B. Bogaard), Mrs. Anna Mae Dorsey of Sioux City and Miss Veronica Lowery, chief telephone operator at Hawarden. He also leaves to mourn two sisters, Mrs. Peek and Mrs. OHara of Salt Lake City, Utah. Besides his wife, Mary Lowery, his three daughters and two grandchildren, Elaine and Donald Bogaard.
Funeral services were held at the St. Marys Catholic Church Friday morning at 9 oclock conducted by Reverend A.J. Foerster of the local parish. Interment was made in St. Marys Cemetery.

OBITUARY OF MARY LOWERY
Source: Sioux Center News (9-29-1938)
Born: September 26, 1865
Died: September 19, 1938
Mrs. Mary Lowery (nee) Keegan, passed away at her home in Rock Valley, Monday, September 19, 1938, following an illness of four years, one month and one day.
Mrs. Lowery was born at Lyons, Iowa on September 26, 1865 where she spent her early life up to the age of 19 when she came to Rock Valley vicinity with her parents. Here the remainder of her life was spent.
Miss Mary Keegan was united in marriage to James B. Lowery on June 5, 1901 and to this union were born three daughters, Katherine (Mrs. C.B. Bogaard of Rock Valley), Mrs. Anna Mae Dorsey of Sioux City, and Miss Veronica Lowery of Chicago, Illinois. Two grand children Elaine and Donald Patrick Bogaard are also left to mourn her passing. She also leaves a foster sister, Miss Stella Conley of California.
Two brothers Michael and James Keegan and one sister, Mrs. John Hayden preceded in death. Her husband James B. Lowery preceded her in death on October 7, 1936.
Funeral services were held Wednesday morning conducted by Reverend A.J. Foerster in the St. Marys Church and interment in St. Marys Cemetery.
Many beautiful floral tributes were presented in the honor of this quiet lady who spent the past four years in her home having been a victim of paralysis.

Picture of James Lowery that was in the St. Marys Church book of Rock Valley. 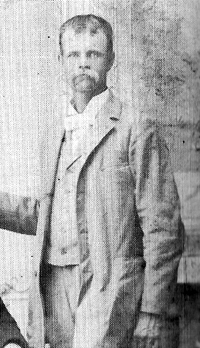