This story was taken from the Sioux Center Centennial book of 1991 page 463 and 464, it was submitted to the book by Roger K. Oliver. It was transcribed for this BIOS by Beth De Leeuw and some notes added by Wilma J. Vande Berg both of the Greater Sioux County Genealogical Society.

John T. Olivier called Sioux Center home for most of his nearly 90 years. He was born May 6, 1892, in Hull, and died on March 20, 1982, in a Rock Rapids, Iowa hospital. John was the oldest of nine children born to Matthijs (Thys) Olivier and Caroline Trigg. Three of their children died in infancy including the last one which also took the life of his 40-year old mother. John was 15 then and family members were farmed out to relatives and friends.

When John was 21 years old he married Mary Bonnema but, not knowing for sure how old he was, he checked the records at the Sioux County Courthouse in Orange City. There it was discovered that his last name was spelled Oliver rather than Olivier, and the shorter spelling was adopted.

John and Mary lived most of their married life at 138 Street, N.E. in Sioux Center. In 1938 they moved to Lester, Iowa, where for four years they operated a grocery store (where the bank is now located). They then returned to Sioux Center to the same house they had lived in before. Here they stayed until becoming residents of Lyon Manor in Rock Rapids in July of 1978.

John ran a drayline and was an electrician before moving to Lester. After returning to Sioux Center, John did defense work in Wisconsin during the second world war and later became head custodian at the Sioux Center grade and high school until his retirement.

Soon after their first child, Kathleen, was born, John came down with tuberculosis and spent time in Oakdale, Iowa, from where doctors expected he would be sent home in a pine box. This, of course, proved to be wrong. One of the best recollections young people had of John was that he was the official Sioux Center Santa Claus which he enjoyed doing for many years.

OBITUARY of John T. Oliver 1892-1982
From the Funeral Folder of John T. Oliver:
In Memory of John T. Oliver
Born: May 6, 1892, Hull, Iowa
Died: March 20, 1982
Services at the Central Reformed Church on Tuesday, March 23, 1982 at 1:30 P.M.
Rev. Albert Ten Clay - Officiating
Special Music: Solo by Irv Mouw singing "Where The Roses Never Fade: and "The Old Rugged Cross"
Organist: Marge Beernink
Casket Bearers: Robert Ageson, Roy Gage, Dale Kraayenbrink, Evan Kraayenbrink, Jon M. Oliver, Jay Oliver, Jim Oliver, Jeff Oliver
Burial in The Memory Gardens Cemetery on Tuesday, March 23, 1982.
Arrangements by Vander Ploeg's
Obituary:
Mr. John T. Oliver passed away Saturday afternoon in Rock Rapids at the age of eighty-nine years. On February 3, 1915, in Sioux Center he was united in marriage to Mary Bonnema who now survives. To this union eight children were born: Kathleen, Mrs. Duane Gage of Lester, Ia.; Vivian, Mrs. Ceel Van Den Brink of East Lansing, Mich.; Phyllis, Mrs. John Zeutenhorst of Orange City, Ia.; Shirley, Mrs. Lorenz Mouw of Orange City, Ia.; and Roger of Rock Rapids, Ia. One son, Jack, and one daughter, Virginia, Mrs. Henrich Kraayenbrink, preceded him death. He is also survived by twenty-eight grandchildren, thirty-three great-grandchildren, one brother, Billie Oliver of Hull, Iowa and one sister, Nellie Vander Schaaf of Beaver Creek, Minn.
Mr. Oliver ran a dray line and served as an electrician in Sioux Center until 1938 when the couple purchased a grocery store in Lester. After four years they returned to Sioux Center where he was custodian at the Sioux Center Public School until his retirement. In 1978 they moved to Rock Rapids where they became residents of Lyon Manor. His passing is mourned by many friends and relatives.

(Note--John's eighth child, a daugther named Vivian, married to Harold Ageson, is not mentioned in his obit.) 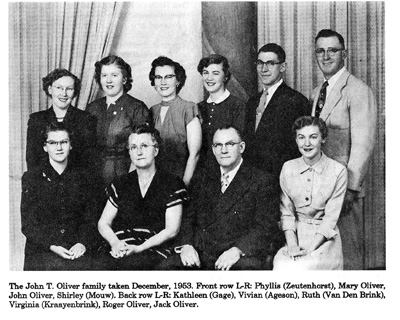