This Story was taken from the Sioux Center Centennial Book of 1991 page 460 and submitted to the book by Lorraine Van Ravenswaay. It was transcribed fir this BIOS by Beth De Leeuw and research notes were added by Wilma J. Vande Berg both of the Greater Sioux County Genealogical Society.

The spelling of the surname was changed from that in the book from Neikamp to Niekamp or Nijkamp as was in the Netherlands records.

Gerrit Niekamp was born in the Netherlands December 10, 1823. Jennie (Lennink) was also born in the Netherlands on March 13, 1825. They came to the United States in 1867 with two daughters, Hermina and Aaltjes (Alice) and an infant son. They crossed the Atlantic Ocean by boat to Ellis Island. The infant son died the day before the boat was to dock. Mother Jennie cradled her baby and didnt tell anyone as to have a proper burial for her son. The family made their first home in Michigan for 6 months. They then moved to Virginia where they lived for 2 years, and from there they moved to New Jersey. A year later they moved to Iowa. They took a train to LeMars, Iowa and homesteaded on a farm now located 1½ miles west of Sioux Center. The two girls helped with the chores and tilling of prairie ground with a team of oxen. Hermina had one ox trained to walk in and lift the heavy yoke up and then hitched the team up. She would command them to go right with G and left with Haw.

Jennie and Aaltjes tended to the house work. The first building was a one room sod hut. Later, Gerrit built a two-room house for the family. Jennie would be up before dawn and carry her sack of wheat to LeMars, Iowa where there was a mill to grind her wheat. Then she would walk the flour back home.

Hermina married Dick Lammers, son of Gerrit Jan and Hendrika (Kastein) Lammers. They were married on April 20, 1888. They raised 11 children. Hermina and Dirk remained on the farm, while Gerrit and Jennie moved to an acreage 1 mile west of Sioux Center and north of the homestead. Dirk and Hermina added on to the two-room house for their family.

Aaltjes (Alice) married John William Lammers, Dirk Lammers brother. Aaltjes and William had three children, all of whom died in infancy. Of the three children a set of twins died at about 6 weeks of age. It was said that Alice fed them cream instead of milk and they had the diarrhea and died. Alice Neikamp passed away on May 29, 1927. William passed away November 1, 1953.

Jennie Niekamp passed away February 22, 1901 and Gerrit passed away on a Sunday afternoon on April 12, 1908 in the home of Dirk Lammers at the age of 86. The funeral took place in the first Christian Reformed Church.

Submitted to the book by Lorraine Van Ravenswaay 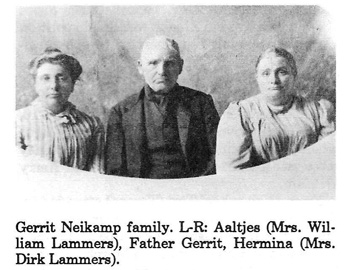