Jantje Mos Kuiper and her husband Roelof were among the early settlers of the Sioux Center area. In 1882, Roelof and Jantje Mos Kuiper immigrated from Dwingeloo, Drenthe, Netherlands to Sioux County, Iowa and first settled in the Alton area for a short time, before coming to Sioux Center. Coming with them were their children; a daughter Margje Kuiper, and a son Berend Kuiper, and a half -brother Klaas Kuiper. Also, with them were two married daughters and their families; Hanna Kuiper and her husband, Jan Jonker, and Geesje Kuiper and her husband Pieter Bartelds and their two children Jantje Jennie and Jantina Nellie Bartelds.

Soon after their arrival (in the USA) possibly in 1882 or early part of 1883, both her husband Roelof Kuyper and her son in law Jan Jonker died before March 1883. Her husband Roelof had died at the age of 70 years, and it is not known where he is buried. Roelof Kuiper was born on December 29, 1811 in Swingeloo, Drenthe, to Klaas Berends Kuiper and his wife Aaltje Roelofs Fokken. He had been married three times, his first wife was Hendrika Bakken, his second wife was Lammchien Geerts Mos, and his third wife was Jantje Mos.
(Note from the transcriber of this text. Mrs. Jantje Kuiper joined the Alton Ref. Church in 1882 as a widow, so it is assumed her husband was most likely is buried in Alton cemetery. She transferred to Sioux Center in 1885. Also indication with immigration is that the Kuiper family may have come in May of 1881. The Alton newspaper was not in print during this period. )

After her husbands death in 1882, Jantje was married to Albertus Berends on October 16, 1883 by the Justice of the Peace John Meyer. They spent the last days of their life living with her daughter, Geesje and Pieter Bartelds home north of Sioux Center. Jantje Berends died Jul 14, 1901 at the age of 67 years 5 months and 18 days and is buried in Memory Gardens Cemetery next to her husband Albertus Berends,. Albertus Berends was born on March 21, 1836 and died on February 25, 1905 at the age of 68 years.

The Sioux Center Newspaper July 17, 1901
Jantje, Mos Kuiper Mrs. Albertus Berends
On the night of Sunday to Monday is at buize P. Bartels deceased old Mrs. Berends. She suffered from cancer of the esophagus. The funeral was yesterday afternoon at the Chr. Ger. church, led by Ds. Smitters. Our sympathy is related to the family.

This was Jantje Mos born 26 Jan 1834 at Dwingelo Drents Neth. She was first married to Roelof Kuiper born 29 Dec 1811. Her parents were Jan Pouwels Mos and Geesje Jans Stoffers. Jantje and Roelof were the parents of Mrs. Geesje Peter Bartels. Jantje married Albert Berends in Alton on 26 Oct 1883.

From the Sioux Center Newspaper or Mar 1, 1905
At the home of his children, Mr. and Mrs. P. Bartels, in Carmel, Saturday afternoon is deceased Mr. A. Berends.
The remains were yesterday afternoon
committed to the earth. Funeral from the Chr. Ger. church.
(This was Albe
rt Berends born 21 Mar 1836 Neth. died 25 Feb 1905 Sioux Center IA. He married Jantje Mos born 14 Feb 1835 Dwingelo Nethe 26 Oct 1883 at Alton IA. She had been married previously to Roelof Kuiper. Alberts parents were Hendrik Berends and Hermina Letting.) 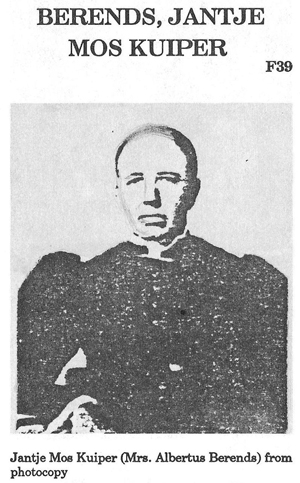