Mr. and Mrs. H. W. Beernink were among the first settlers in the Sioux Center area. Hendrik Willem Beernink was born in Wisch, Gelderland, The Netherlands, on October 17, 1842, the son of Sevrien and Hendrijna (Nijland) Beernink. In 1856, the family moved to De Heurne, Dinxperlo, into a home called Harmenhuis. Hendrik and his brother Hendrik Jan left Dinxperlo for the United States in May of 1866 and then returned to The Netherlands together.

Hermina Bernhardina (or Berendiena), later called Wilhelmina, was born December 19, 1842 to Theodor Johann (also known as Derk Jan) and Adelheid (also known as Aaltjen) Tieltjes Heideman in Suderwick, Germany. In 1862, Wilhelmina or the entire family moved to Dinxperlo, directly across the border. Wilhelmina worked as a governess in The Netherlands before her marriage.

Hendrik W. and Wilhemina B. were married in Dinxperlo on May 28, 1868 and emigrated to the United States in June of 1868, settling in Alto. Wisconsin. It was there that their two eldest children were born Simon on September 11, 1868, and Johan (John) on April 22, 1871. Hendrik had been a tailor in The Netherlands and continued this trade in Alton sometime going to homes to sew and often working for .30 cents a day.

The Beerninks first home was a sod dugout which Hendrik built while Wilhelmina and the two boys boarded at the Van Wechel home in Orange City. Hendrik crossed the prairie with a team of oxen to the Rock River, a distance of about 13 miles, to cut trees for the thatched roof of the dugout, which was then covered with sod. Fuel was also brought from the Rock River, the men starting out at midnight with a team of oxen pulling a wagon and then returning the next night with trees, some quite green so they would burn longer. Buffalo chips and prairie hay twists were also used for fuel.

One wintry day the thatched roof of the sod hut caught fire and the hut burned down, leaving the family homeless. They were offered refuge with the Johan D. Wandscheer family (their neighbor ½ mile away until their home was repaired the following spring. The family was fortunate to have stored a supply of potatoes and a butchered hog in their root cellar; these were shared with the Wandscheers.

The second home was built on the line between the homestead and an 80 acre Tree Claim adjoining the homestead, Not having the money for the required tree plantings and other improvements, the Beerninks sold the claim to a neighbor for $1. Per acre and a cow. Later a frame house was built of cottonwood, but when the wood dried, it shrank so badly that great cracks were left in the walls and ceilings. Snowdrifts would cover the floors and beds at times, causing the family to long for their warm sod hut. The two feather beds Wilhelmina had brought with her from the Netherlands were, she said, what kept them from freezing to death!

The decade of the 1870s brought the grass hopper plague. Swarms of grasshoppers darkened the sky and settled to devour everything in sight. Three years of this plague left the settlers with scant fare, but a good crop the fourth year brought 100 bushels of wheat which was sold for a $1 a bushel. That year the Beerninks, having gone by sun time since their arrival in the States, bought their first clock, a real luxury to them.

Some years later the Beerninks built a new house on the farm where they lived until retiring to a new house in Sioux Center in 1899, at which time their son Simon and his wife Jessie moved to the homestead. ( The farm home burned down in September of 1979, 10 months after Simons son William and his wife Johanna had moved out of it into an apartment at the New Homestead).

The Beernink Family were members of the Frist Reformed Church in Sioux Center, but before that church was organized and built they walked to mid- week services held in a rural school house 2 miles east of Sioux Center. Those services were led by Rev. S. Bolks of Orange City. Later the family transferred their membership to Central Reformed church in Sioux Center.

The Beerninks always had a large garden, raising almost every kind of vegetable as well as watermelon, muskmelon, and citron. They also had gooseberry and currant bushes and beautiful rose bushes. Vegetables such as sauerkraut, cut beans, and cucumbers were all salted down and stored in 3-20 gallon stone crocks. Pork was also salted down or fried, covered with lard, and stored in crocks. Potatoes were stored in bins, in cellar or cave, as were cabbages, which hung from rafters, heads down. Carrots were stored in soil in crocks, No garden seeds were available in stores, so the family selected and dried the choicest ears of corn and all kinds of vegetable seeds for the next years plantings. Eggs were often stored in oats for the winter in air tight pails which were gently tuned upside down from time to time to keep the egg yolks centered. Later on when times were better, three or four barrels of apples were bought in the fall and stored in the cellar, and every evening each one in the family enjoyed an apple.

One of the highlights of this time was the laying of the railroad track and the coming of the train, ca. 1889. The working crew, who spoke a different language, lived in tents along the road, east of the Beernink home. The youngest daughter Johanna, finally got up enough nerve to get acquainted with the workers children and enjoyed playing with them. Sometimes they would gather milkweed pods, which their mothers would use tor stuffing pillows.

Hendrik loved to travel. In 1900 he took a trip to the Netherlands and later traveled through almost every state in the Union. He attended several World Fairs, and spent several winters in Mexico, Florida and other warm climates. Denver and other large cities were also visited by him.

Henry remained single. As a young man he worked in the livery barn owned by his brother in law Henry De Mots and also lived in the home of Henry and Ella for many years. When his father died, Henry went to live with his mother, and when she became ill, Henrys sister and husband, George and Johanna Siemen, moved in with Henry and his mother. Henry remained with the Siemans until his death on July 10, 1963. 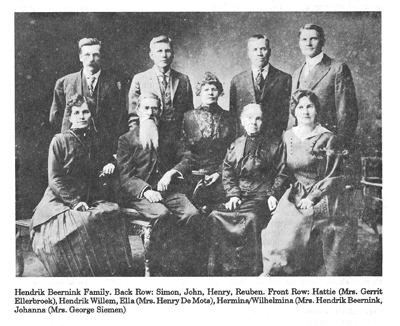