Mass of Christian Burial will be 10:00 a.m. Monday, August 29, 2011at St. James Catholic Church with Father Matt Hewitt officiating. Interment will at St. John Cemetery, Craig, Iowa. Visitations with the family present will be after 4:00 p.m. Sunday, August 28, 2011 at the Carlsen Funeral Home in Le Mars followed by a 7:00 p.m. Scriptural Wake Service Sunday evening at the funeral home. Visitations will continue Monday morning at the church from 9:00 a.m. until service time.

Shirley Louise Crowley was born June 16, 1924 at Sacred Heart Hospital in Le Mars, Iowa to Earle and Cora (Langerock) Crowley. Shirley attended school in Le Mars and graduated from Le Mars Central High School in 1942. During her last years of high school, Shirley worked as the cashier at the Royal Theater in Le Mars. The manager of the theater was drafted into the military and Shirley was named manager of the Royal and Pix Theaters by the owners. In 1946, upon leaving the theaters, Shirley accepted a receptionist position with Dr. Bowers, Burroughs, and Bowers in Sioux City.

Shirley was united in marriage to Elmer Asseln on July 19, 1947 at the St. James Catholic Church rectory. Shirley and Elmer farmed near Craig, Iowa until retirement. During their retirement they continued to live on an acreage near Craig.

She was preceded in death by her parents, Earle and Cora (Langerock) Crowley; a daughter-in-law, Becky Asseln in 2002; a son-in-law, Roger Ping in 2001; and 2 brothers, Wayne and Earle Crowley. 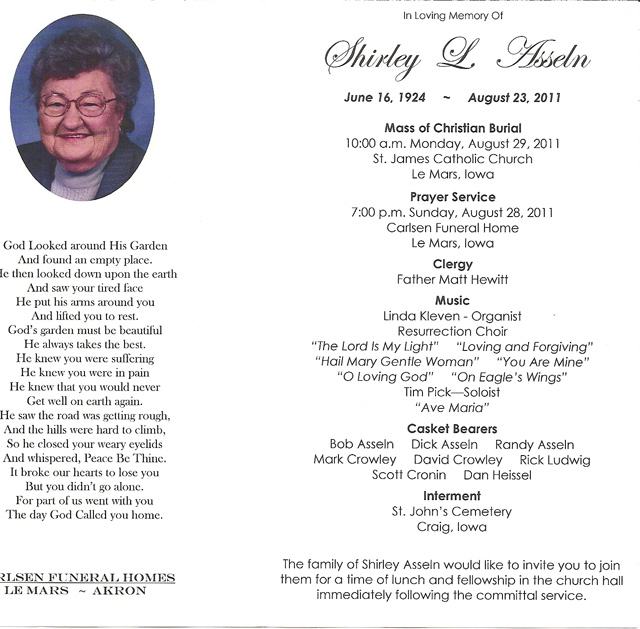