Jerry D. Rice, 79, of Moorhead, Iowa passed away Wednesday, January 6, 2021 at his residence in the arms of his wife Barbara.

Per Jerry's wishes cremation has occurred and a Celebration of Life Party will be held at a later date. Jerry did not want anyone to risk their health to come show their love or respect during this Covid-19 pandemic. Arrangements are under the direction of Rush Family Care Service, Onawa, Iowa.

Jerry was born May 12, 1941 in Omaha, Nebraska the son of Robert "Red" William and Frances "Fran" Edith (West) Rice. He grew up in Omaha, Nebraska and attended school at Dundee Elementary and Tech High School. Jerry enlisted in the United States Air Force and served until his medical discharge.

Jerry and Barbara Anne Sterner were united into marriage on August 28, 1960 in Las Vegas, Nevada. Five children were born to this union, Fred, Robert, JeriDee, Teresa, and Scott.

He was a U.S. Forest Ranger in California for 25 years where he served as a firefighter and law enforcement officer. Later in life he drove his own truck and also drove for Greyhound Bus Lines.

He enjoyed camping, fishing, kayaking, and shooting. He loved music, especially the song, "Why Me" by Kris Kristofferson because he related so well to all the lyrics. He loved his family, especially his wife, children, grandchildren, and great-grandchildren. He enjoyed all animals and enjoyed the love of his two kitties and his grand-dogs, Buddy and Miss Bit.

A major part of his life was when he played "Santa" in local towns for children of all ages for over thirty years. Jerry brought so much joy to children during the Christmas season wearing his red suit. He deeply loved all children and sharing Christmas joy, love, and hope to them all. He also loved to take Santa to nursing homes to the delight of the residents. Jerry taught rifle, shotgun, and archery classes at a local 4H club. He was a lifetime outdoor enthusiast and loved being in the great outdoors.

Jerry was a member of Moorhead Christian Church, Moorhead, Iowa, where he has many dear friends. He loved God and he loved Jesus. 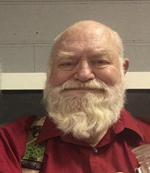