Christine L. Ehlers was born September 30, 1924 to Frederick and Sophia (Dersein) Pobanz in Denison, Iowa. She was united in marriage to Lionel Fred Ehlers on September 22, 1946 at Zion Lutheran Church in Denison, Iowa. To this union three sons were born. They made their home on a farm near Bronson, Iowa where Christine enjoyed her job as a farm wife. Lionel passed away July 25, 1990.

She is survived by her sons, Lonnie (Shirley) Ehlers of Moville, IA and Larry (Carla) Ehlers of Lawton, IA; daughter-in-law, Nancy Ehlers of Sioux City, IA; eight grandchildren and 17 great-grandchildren. 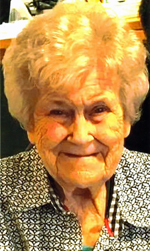