Doris attended Morningside College in Sioux City, and was a school teacher prior to her marriage. She later worked for many years as a "carder" at Weller Fishing Tackle Company in Sioux City. Doris was a member of the American Legion Auxiliary and the Dorcas Society. She attended Island Grove Methodist Church in New Berlin, Ill.

Her goal for the past few years was to reach the ripe old age of 100 years, and she accomplished that on April 22, 2009. Most of the time prior to reaching her 100th birthday, she was very alert and agile and very independent. A fall in March 2009 took away her independence and her zest for life. She will be missed. 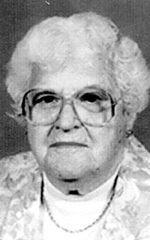