Funeral Services will be 2:00 P.M. Saturday, March 14, 2020, at the Faith Lutheran Church, Onawa, Iowa with Pastor Steve Pera officiating. Burial will be in the Belvidere Cemetery, rural Turin, Iowa. Visitation will be 5:00  7:00 P.M. Friday, March 13, 2020 at the Rush Family Chapel, Onawa, Iowa. Arrangements are under the direction of Rush Family Care Service, Onawa, Iowa.

Bernadine May Christensen was born January 8, 1931 in Blencoe, Iowa the daughter of James Francis and Deborah May (Jones) McCarville. She graduated from Onawa High School in 1949.

Bernadine and Ralph were united into marriage on May 13, 1951 in Onawa, Iowa. They farmed in Onawa and then moved to Turin in 1956 where they made their home and were lifelong farmers. In 1976 they built a home in Onawa and still continued to farm.

She was a member of the Faith Lutheran Church in Onawa, Iowa and was active through the womens fellowship WELCA. Bernadine was an avid bridge player. She enjoyed antiquing, collecting Fiestaware, and quilting. She was very dedicated in caring for her family and arranged a lively social calendar for them. She had many friends.

Bernadine is survived by her loving husband, Ralph Lee Christensen; her children, Debra (Frank) Hill of Powell, Ohio and Cynthia Christensen of Iowa City, Iowa; her grandchildren, Aaron (Meghan) Hill and Megan Hill; her great-grandchildren, Elizabeth May and Michael Lee Hill; her sister, Emogene (Gary) Thibodeau of Maplewood, Minnesota; and many nieces and nephews.

She is preceded in death by her parents; two brothers, Bernard McCarville and Terry McCarville; and one sister Bonnie Kelley.

Condolences may be left online for the family at www.rushfamilycareservice.com

Memorials will be directed to the Alzheimers Association. 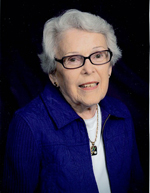