Esma Minnie Ida Rosel was born on December 30, 1910 in Rock township, to George and Anna (Runge) Rosel Sr. She was baptized on February 12, 1911 at St. John's Lutheran church, Rock township. She was confirmed on March 28, 1926 at Immanuel Lutheran Church in St. Ansgar by the Rev. Paul Brammer. She received her education through the tenth grade at St. Ansgar public schools.

Esma Rosel and Paul Hartwig were married on Thanksgiving Day, Nov. 26, 1931, at Immanuel Lutheran Church in St. Ansgar. God blessed this marriage with a daughter, Karen June. The couple lived on the Hartwig home farm in Newburg Township until November 1975 when they retired from farming and moved to St. Ansgar.

Esma belongs to several community and church organizations and particularly enjoyed her Federated Women's Club, the St. Ansgar Garden Club, and WELCA at St. John's Church. She loved her garden with all its roses, and was an avid siticher. Esma's beautiful singing will be remembered by many. As a couple, Paul and Esma rarely missed sports or music activities through their grandson's school years.

Left to cherish her memory are her daughter, Karen, and son-in-law, Frederick Steinberg; her grandson, Brian and his wife, Tori, and three great-grandchildren, Gregory Paul, Kayley Sue and Riley Dean; and her grandson Bruce, all of St. Ansgar; three sisters: Leola Ruehlow and Doris Erdman of St. Ansgar, and Wilma Kronemann and her husband Lloyd, of Grafton; two brothers, Lawrence Rosel and his wife, Norma, of Osage, and George Rosel Jr. and his wife, Marla, of Bertram, Iowa; nieces and nephews and a host of friends.

Esma was preceded in death by her husband, Paul on January 3, 1997; by her parents, George and Anna Rosel Sr., by two sisters, SaVera Rosenberg and Norma Gerlach; and by a brother in infancy. 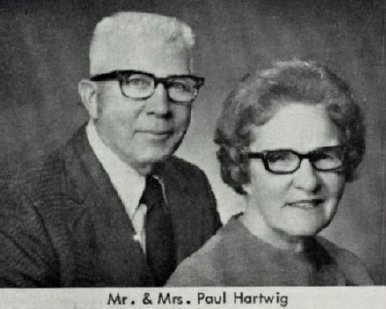