Ted Russell Lenocker, 87 of Dexter passed due to complications of cancer on Sunday, April 18, 2021 at the Stuart Community Care Center.

Visitation will be held Wednesday, April 21, 2021 at Caldwell Parrish Funeral Home, Winterset Chapel, where family will greet friends from 5 to 7 PM. Funeral services will be held at 10 AM, Thursday, April 22 at the funeral home. Burial with military honors will follow the service in the Dexter Cemetery.

Ted, son of Frantz Moore and Florence (Wells) Lenocker was born April 27, 1933 at the Des Moines Methodist Hospital. He was baptized at the Dexter Methodist Church on April 25, 1943. He attended country school at Penn #9 and graduated with the Dexter high school class of 1951. He has lived his entire life in Penn Township, Madison County with the exception of two years while serving in the US Army with the POW Command in Korea during the war (1952-1953) and eleven days in the Stuart Community Care system.

Ted has always been interested in agriculture and livestock. As a child, he was a member of the Penn Prize Winners 4-H Club. He showed a black Angus calf (Mike) and was awarded champion of all breeds at the 1945 Aksarben livestock show in Omaha.

Ted married the love of his life, Geraldine (Geri) DeVault on January 22, 1952. They are the parents of three children and have celebrated 69 years of marriage.

He was interested soil conservation and has had ponds built plus many terraces and tiling work done on his farms. He has received several county conservation awards over the years.

He enjoyed traveling and visiting with people. He and Geri wintered 25 years in Florida; also been in every state plus Russia.

He has one grandchild, Jackson Lenocker and was grateful that he is interested in livestock and is the sixth generation with the stewardship of the family farm homesteaded by Jacksons great, great, great grandfather, Godfrey Lenocker in 1868.

Ted was preceded in death by his parents; in-laws, Orla and Estella DeVault; daughter, Judy Philbrick of Florida; brothers-in-law, Delno Maddy and Dalton Slater both of Winterset; Ronald Wahlert of Panora; nephews, Dennis Clements of Dexter and Steven Slater of Winterset.

Lunch will be served at the Dexter Methodist Church following burial.

In lieu of flowers, memorial contributions may be made to Hospice of the Midwest, Stuart Community Care Center, or Dexter Methodist Church. 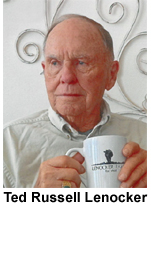