Nancy Powell Brown, widow of the late John Brown, living on North 1st street, was found dead in her bed on Thursday morning, July 5th. Three weeks previously, she had called in her physician during the night, thinking she had acute indigestion, but since that time had been better. The neighbors called on her frequently, Mrs. H. S. Eloy being there late in the evening before death. The next morning, a member of the family went over to see her and found her dead. A heart weakness was the immediate cause.

Mrs. Brown came to this country in 1854 with her parents, marrying John Brown in 1857. They farmed extensively for many years, moving to Winterset as a permanent home in 1885. Their only daughter died in 1884, leaving a little daughter, Ave Dabney, whom they reared as their own child. She, now Mrs. R. R. Wilkie of Oskaloosa, together with a half brother, Gaylord Hornbeck of California, survive their grandmother.

Mrs. Brown was a devoted member of the Presbyterian church, a woman of strong mind and energy, fully retaining to the end her excellent mental faculties. Rev. J. S. Corkey conducted funeral services at the Brown home on Saturday afternoon.
________________________

Nancy M. Powell, daughter of Benjamin and Elizabeth Powell, was born in Marion county, Indiana on the 3rd of May, 1839 and died at her home in Winterset, July 5, 1917, aged 78 years.

Her father was a Welsh stock and was one of the substantial pioneers of this county. He brought his family here in the spring of 1854 and bought 1200 acres of land. Here the daughter grew to young womanhood and on November 1, 1857 she was united in marriage with John Brown. They began housekeeping in true pioneer fashion in a log cabin and shortly afterwards built the first stone house on the Coon divide.

To this union was born one daughter, Elizabeth Olive, who died in 1884. Mrs. Brown moved to Winterset in 1885 and has made her home here ever since. She is the last of a family of 12 children. Mister Brown died six years ago. She is survived by two grandchildren, Mrs. T. R. Wilkie, of Oskaloosa, and Gaylord Hornbeck, of California, and two great grand children, John and Gladys Wilkie, of Oskaloosa.

Mrs. Brown lived a quiet unassuming life. She was always ready and willing to help where she could. She united with the Presbyterian church in this city in 1876 and has always been a faithful member.

Mrs. Brown lived in this county for 63 years. She was very active and managed her own affairs to the last. Both she and her husband contributed to the erection of all the early churches in the county and she never ceased to feel a deep interest in the community welfare. Her life has benefited the county in many ways and she justly merited the high place she won in the estimation of all who knew her. She was ready for the end and often expressed her willingness to go when the time came. 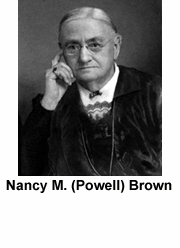