Funeral services for Helen Hiatt, 93, will be 2 p.m. Friday at Truro Congregational UCC Church. Visitation will be on Thursday at Kale Funeral Home in Truro with the family present 5 to 7 p.m.

Helen Louise Hiatt, the youngest child and only daughter of Boyd and Flossie (Farson) Murphy, was born on a rural Madison County farm outside of Truro on November 25, 1917. Most of her life was spent in Madison County in or around Truro. After graduating from the Truro High School in 1934, she became one of the town's only Telephone Operators. She married Carroll Dwight Hiatt on August 23, 1940. They lived in the Truro area with the exception of a short time in Red Oak, Iowa where their son, Dennis Dwight, was born in 1942. After coming back to Truro, a daughter, Penny Louise, was born in 1947, after which they returned to Red Oak for two years. They returned to Truro and moved to the location of the Natural Gas Booster Station, located at the Truro exit on I-35, and stayed there until 1966 when their house was moved into the city of Truro. It was there they lived until moving into the Colonial Apartments in 1985. Dwight died on February 22, 1988, and Helen continued to live there until her illness caused her to move to the Regency Care Center in Norwalk in December of 2005. She passed away February 27, 2011 at the Care Center.

Helen was a life-long member of the Congregational Christian United Church of Christ and of the ladies group known as the Thursday Girls. She loved quilting, singing in the choir, working crosswords and bowling, which she did until the fall of 2005. She enjoyed going places and best of all, going out to eat.

Helen loved life and her family and was always glad to see them. She never complained about how often they visited; she was just glad to see anyone, and always said "I know you're busy" if you'd comment about not being able to stop by more often. She had several favorite quips/sayings placed around her home, but her most favorite was: Old Age Is Not For Sissies. This one you'd find sitting on top of her TV at Regency.

Her Faith and allegiance to her Church were never in doubt. There was a time after moving to Regency she was asked the question "Where would you go or what would you do if you could do anything
in the world?" Her response, without hesitation, was "Why I'd sit at the feet of Jesus".

She was preceded in death by her parents; husband, Carroll Dwight; brothers, Weldon, Laurel and Howard; and grandson, Wade Hiatt.
She is survived by her daughter, Penny and husband Eric Schaffer of Truro; son, Dennis and wife Suzanne of Lorimor; granddaughter, Jody Heilstedt of Bolingbrook, IL; grandson, Rick and wife Carrie Schaffer of St. Charles; grandson, Chet Hiatt and wife Ginger "Sam" of Truro. Nine great-grandchildren; one great-great grandchild also mourn her loss, along with five nephews and many friends.

To send flowers or a memorial gift to the family of Helen L. Hiatt please visit our Sympathy Store. 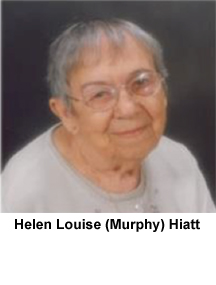