William George, son of Alexander and Susan Bonham, was born in Coshocton county, Ohio, Feb. 24, 1847and departed his life at his home in Lorimor, Iowa. October 31, 1927, at the advanced age of 80 years, 8 months and 7 days. On February 24, 1875, he was united in marriage to Susan D. Phillips of Coshocton County, Ohio. To this union three children were born, Ora of Spokane, Washington, Jay who died in childhood and Ernest who resides near Macksburg. On January 2, 1894, his good wife went to her reward.

On September 13, 1897, he was married to Melissa Klingensmith, who with the children, remain to cherish his memory. He united with the church in young manhood. He was a member of the M. E. church of Lorimor at the time of his death and found great comfort in the Christian faith during all of his life, and especially in his last days on earth, giving assurance to his family that he was prepared and ready to go to meet his God whenever his call came. He was of a family of nine children, all of whom have gone in their reward, except one brother, Sam, who lives near Macksburg.

He has left lingering in the memories of his loved ones, as a result of the Christian ideals be cherished, thoughts that will count throughout eternity, shown by the fact that the daughter is recalling for these trying moments that wonderful song "On Christ the Solid Rock I Stand," taught to her by her father when she was but a child.

A native of Ohio, he was a member of a family of nine children, all of whom are dead with the exception of a brother Sam Bonham, who lives near Macksburg. He is survived also by his widow, a son Ernest Bonham, of Macksburg; and another son, Ora Bonham, who lives in Spokane, Washington.

Funeral services were held from the Methodist church in Lorimor November 2, conducted by the rev. E. F. Thompson, assisted by the Rev. George Hall. Burial was made in the Macksburg cemetery. 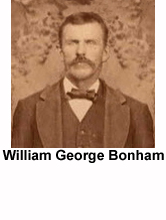