Mrs. N. Anderson died Sunday at the home of her daughter, Mrs. Frank Shultz, of Madison township, and the remains were buried Monday. She was an old settler in Madison county, and we understand used to live in Winterset. She will be mourned as a lady of high character and estimable disposition.
________________________

An other of the old-time residents of Winterset has passed away, Mrs. Nathaniel Anderson. The Andersons were early settlers in Winterset, and will be long remembered for their sturdy virtues and their kind and neighborly ways. Mrs. Anderson died, where for some time she has made her home, at the residence of her daughter, Mrs. D. F. Shults, of Madison township.
________________________

Eliza Loehr was born in Adams county, Virginia, Nov. 15, 1896 (sic). Had her life been spared three days longer she would have been 73 years old.

She moved with her parents to Indiana in 1834, and was married to Nathaniel Anderson January 19, 1843. She then moved to Illinois living there but a short time and then moving from Illinois to Madison county, Iowa, in 1855.

There were born to them eight children, four girls and four boys, five of them being dead and three living. Mima Strong, of Bloomington, Indiana, Geo. F. Anderson, of Prairie City, Iowa, and Nora Shults, of Madison county were with their mother during her sickness and death.

She has been a member of the First Christian church of Winterset for a number of years, being a lover of the church, and during her sickness she often spoke of the peace and hope she had and often said she was waiting the blessed Saviors coming, and many time she spoke of the mansions prepared for her.

A few days before her death she said she was going and called her friends and relatives around her bedside and kissed them good bye, but she rallied again to suffer a few days longer before the messenger came.
________________________ 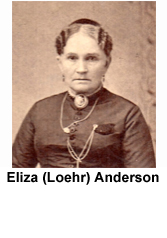