She came with her parents to this county when a little girl and was one of the very early pioneers of Madison county. She was married to J. A. Gordon Sept. 3, 1865 and just a few months ago, Mr. and Mrs. Gordon were permitted to celebrate their golden wedding anniversary. Six children were born, two of whom with the husband, survive. They are Elmer Gordon and Mrs. Edna Gilleland, both residing in this county. Ellsworth died May 20, 1910, the others dying in infancy.

Mrs. Gordon united with the First Christian church of Winterset 30 years ago, and remained a faithful member until her death. She was also an active and honored member of the Woman's Relief Corps of this place.
________________________

She united with the First Christian church of Winterset, January 18, 1885, and lived a consistent and faithful Christian ever since. For the past year she has been deaconess of the church and was loved by the entire membership. She was a member of the Womans Relief Corps, of Winterset.

The funeral was preached by rev. L. E. Follansbee of Des Moines at one oclock on New Years afternoon. A very large congregation of friends were in attendance and her remains were buried in the Gordon cemetery.
________________________

The City and County

Mrs. Jonathan Gordon died at her home just west of Winterset on last Thursday, after a very brief illness with pneumonia. Mrs. Gordon, whose maiden name was Kellogg, was one of the early settlers of this county and she was the last survivor of her parental family. Funeral services, conducted by Rev. L. E. Follansbee, her former pastor, were held from the Christian church on Saturday. 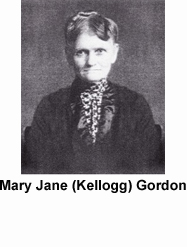