F. O. Morris passed away at his home near Truro, Jan. 2, 1925 after a long and severe illness. He was the son of Robert and Phoebe Morris and was of a large number of brothers and sisters, of whom three have preceded him, one being a twin brother. He was born near Indianola, Jan. 14, 1867, his age being 57 years, 7 months and 18 days.

The deceased acknowledged his Christ and united with the M.E. church at Indianola in early manhood and has ever been a faithful Christian. Frank has been in failing health for the past seven years, but has borne his suffering patiently and as his faithful companion asked him on the last morning of his sickness if he was ready to go he replied to her "Yes".

Loving hearts and gentle hands ministered tenderly to this loved one, but to no avail, as death came nearer and bore the spirit gently away, and while there will be sad feelings and heavy hearts caused by this death that will be hard for human sympathy to reach, we hope the bereaved ones may be consoled through the promises of the Blessed Redeemer. Thus a kind and loving husband and father, a true friend, an honorable and upright citizen has passed from this life to the home beyond the skies, eternal in the heavens.
________________________

Frank Morris, a resident of this vicinity for many years died at his home near Truro January 2. Funeral services were held at the Truro M. E. church Sunday afternoon and the remains were laid to rest in the Young cemetery east of Truro. 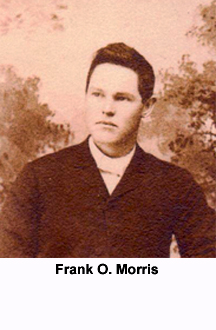