Excerpted from a letter sent by Hirams son, John Hurst, to Herman Mueller and published in the March 22, 1906 Winterset Madisonian.

Hiram Hurst was born in Washington county, Va., March 1st 1821. He was married to Elizabeth Todd, Dec. 20th, 1840. Moved from Virginia to Tennessee and then to Missouri and then to Madison county, Iowa, April 1st 1846. Moved from there to Nebraska in the fall of 1854, and settled on the Missouri river at the mouth of Weeping Water now in Otoe county, being one of the first white settlers in the county. He followed farming, and was the first Justice of the Peace in the county, which office he held continuously for twenty years. He was a Baptist minister for a number of years before his death which occurred on the 18th day of September, 1889.

Hiram was married three times. His second wife died before a year after marriage. His third wife was a Mrs. Wood, of Lorton, Nebraska. To them were born four children three still living: Mollie, Edward and Fred, all living in Otoe county, Nebraska. 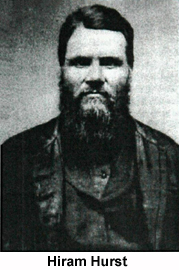