Kenneth Joseph STALDER, 59, of Huxley, Iowa, passed away unexpectedly and peacefully October 24, 2022 at home with his beloved dog, Chocolate, by his side.

Ken (known as "Kenny" by close family and friends) was born in Washington, Iowa on August 31, 1963. Kenneth was the son of the late Joseph and Jean STALDER. He graduated from Fairfield High School in 1982 and went on to Iowa State University in Ames, Iowa, where in 1985 he received his Farm Operations degree and in 1987 a Bachelor of Science in Animal Science. Ken then accepted a position with Swiss Valley Farms in Cascade, Iowa, where he was a lifestock production specialist from 1987 to 1990. Ken met and fell in love with Cheryl BURNS, his future wife, in Cascade, Iowa, and they were married on July 22, 1989 in Morris, Illinois. Further aspirations for education led Ken to pursue a Master of Science degree at Western Kentucky University in 1992. Ken earned a Doctor of Philosophy in Animal Breeding and a minor in Immunobiology in 1995. Following graduation, he worked as the Extension Swine Specialist in Jackson, Tennessee. Ken and Cheryl were blessed with three children, Lauren, Sam, and Will while living in Jackson, Tennessee.

At the time of his passing, Ken was employed as an Animal Science Professor at Iowa State University. His work entailed doing research, teaching, mentoring, and extension and outreach. He was awarded the prestigious Rockefeller Prentice Award in Breeding and Genetics in 2020 which is a national recognition of work on sow longevity. His many professional accomplishments have made a worldwide impact. He trained 18 Masters Students, Six PhD Students, and 12 post-graduate students. Today, virtually all swine genetics companies are integrating his research, extension, and teaching programs. Through his job at Iowa State, he also had the opportunity to travel and experience many different counties and cultures in his lifetime.

Ken treasured spending time with family and friends, especially his granddaughter, Emily. He grew up a Cardinals fan and passed on his love of baseball to his children. This last season was very special to experience as a Cardinals fan and he loved every moment of it. His love of baseball will continue on through his children and grandchildren. He also enjoyed attending and watching Iowa State football and basketbal games.

Ken is preceded in death by his parents, Joseph and Jean STALDER; and his sister, Victoria DUENSING.

Graveside services will be held at 11 A.M. Saturday November 12, 2022, at St. Joseph Cemetery in East Pleasant Plain with Rev. Robert Lathrop officiating. In lieu of flowers, the family would like to have memorials directed toward the following: Kenneth Stalder Swine Education Endowment, Animal Rescue League of Iowa, St. or Cecilia School Scholarship Assistance Fund. These memorials may be left at the graveside services or mailed to the family at: 704 Larson Drive, Huxley, IA 50124. Gould Funeral Home of Brighton is assisting the family. 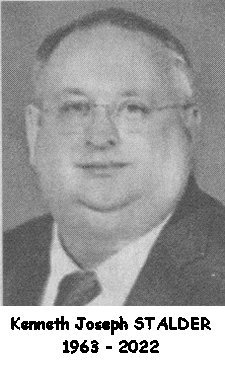