Visitation for family & friends will be 5:00 p.m. - 8:00 p.m., Thursday, November 17, 2022, at Behner Funeral Home. Funeral service will follow starting at 8:00 p.m., with Pastor Danny Cary officiating. Cremation will follow the service with inurnment at a later date.

Memorials may be made to the family to go toward his children's college fund and mailed to Stephanie MERRILL, 2432 Glasgow Road, Fairfield, IA 52556.

Matt graduated from Pekin High School in 1996. He went to college receiving his Welding Degree. Matt worked at Dexter Laundry as an Automation Technichan/Laser Operator.

Matt was very talented in carpentry and mechanic work. He was an avid motorcycle rider and liked hot rods. Matt listened to all styles of music. Most important was spending time with his children and family.

Matt will be missed by his wife, Stephanie of Fairfield; two children, Jazlyn Maquel MERRILL and Atley Bach MERRILL both at home; his parents, Kenneth and Lora MERRILL; and two brothers, Mike (Robie) MERRILL of Batavia and Jeff MERRILL of Phoenix.

He was preceded in death by his grandparents, Al MERRILL, Ruth RANDOLPH MERRILL, Ray SCOTT and Willa SCOTT. 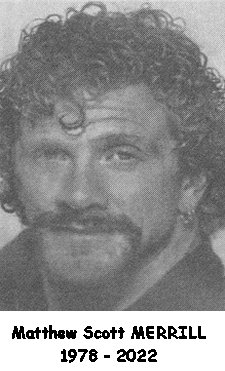