He was born July 18, 1931, and raised on the family farm in rural Brighton, IA to John Joseph and Gertrude Agnes FRITZ PACHA. Family, faith, and service were at the center throughout Charlie's life. As one of seven children growing up on the farm, a strong work ethic and sense of humor were required in the PACHA household. Charlie graduated from Brighton High School in 1950, loved his country and served 23 years as a cryptographer in the United States Air Force, retiring as a Chief Master Sergeant in 1973. Charlie met his future wife, Maggie, during his tour in England at RAF Sculthorpe in the early 1950's. They married on October 2, 1954 and enjoyed 67 loving years together. Charlie's time in the service afforded the family the opportunity to explore the world together with tours in England, Italy, and Virginia before settling in Kalona, IA following his retirement from the military. He then served as Washington County Treasurer from 1978 until his retirement in 1997. In retirement, Charlie enjoyed family and traveling amongst other hobbies. He loved fishing, woodworking, and took pride in maintaining his property outside Kalona and in Washington. It is well known that Charlie could stack firewood that would withstand the blusteriest of Iowa's winters. His quick wit and sense of humor will surely be missed.

A Funeral Mass will be celebrated at 10:30 a.m. Wednesday July 6, 2022, at St. Joseph and Cabrini Church in East Pleasant Plain, IA with Rev. Bernard Weir officiating. Burial will be in St. Joseph Cemetery. Military Honors will be provided by American Legion Post No. 29, Washington. Visitation will be held at St. Joseph Church from 6 to 8 p.m. Tuesday July 5, 2022. Memorials to Parkview Home Activity Fund may be left at the church or mailed to the family at 122 Green Meadows, Washington, IA 52353. Gould Funeral Home of Brighton is in charge of arrangements. 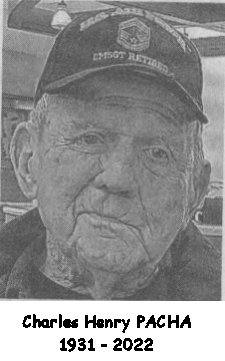