Clarabell Marie VITTETOE passed away at her home surrounded by family on May 16, 2022, having attained the age of 88 years. Mass of the Resurrection will be held 10:30 a.m. Saturday, May 21, at St. James Catholic Church with services co-celebrated by Father Bernie Weir and Father Charles Fladung. Services will be livestreamed on the Jones & Eden's Facebook page. Calling hours will begin 3 p.m. Friday, May 20, at the church where the family will receive friends from 5 to 7 p.m. Rosary services will begin at 4:30 p.m. Friday at the church. Interment will take place at Elm Grove Cemetery in Washington (note: in Washington Co., IA). A general memorial has been established. Jones & Eden Funeral Home is assisting the family with arrangements. Online condolences may be sent for Clarabell's family through the web at www.jonesfh.com.

Clarabell Marie VITTETOE was born Aug. 6, 1933, one of 10 children born to Edward and Margaret (PECK) LEDGER in Jefferson County, Iowa. She graduated from eighth grade country school in 1947. Clarabell was 11 years old when her mother died of a heart attack and she and her sisters assumed all the household duties of raising and caring for the large family.

Clarabell enjoyed going to CYO activities and barn dances and this is where she met her future husband. She married Wilfrid (Bill) VITTETOE on June 21, 1955, and they made their living farming while raising five children on the farm east of Washington, Iowa.

She was an accomplished seamstress, making many of her own clothes and those of her children. She would later pass sewing skills on to her daughters, granddaughters and great-granddaughters. For their high school graduation each grandchild was gifted a full size bed quilt made by Grandma Clarabell according to their wishes. She also created smaller quilts for the great-grandchildren as well as scrap denim quilts from worn clothing. Each summer she would grow an enormous vegetable and flower garden in the center of their U-shaped driveway and then preserve the food for the family to enjoy. Her flower beds and garden earned many compliments from visitors and those who drove by on Highway 92. She continued her joy of sewing and gardening at the home Bill and her (sic) built in 1981 southeast of Washington.

When the children became involved in 4-H, Clarabell was a club leader and continued as a 4-H Volunteer for over 20 years. She was active in the Women's Pork Producer organization (Porkettes) serving on several state committees and receiving the State Bell Ringer Award. She became talented in working with Pigskin, constructing garments and roses for which she won several awards. When she and Bill traveled to Russia in 1993 she took along supplies to teach pigskin rose making which was the highlight for the Russian women.

Her pride and joy was raising her family and seeing them grow to hard working successful adults and raise their own families. She always had full meals on the table and enjoyed baking goodies. While Bill planned the itinerary, Clarabell packed clothes and food for the annual family vacations to states near and far. When grandchildren and great-grandchildren were born spending time with them was always a delight. Holidays were grand occasions with decorations, traditional meals, and gifts selected and wrapped for each family member. She never missed a family member's birthday or wedding anniversary giving cards, money or gifts.

In their retirement years, Clarabell and Bill spent winter months in the Rio Grande Valley of Texas enjoying craft shows, flea markets, and listening and dancing to country and polka music while they made new friends.

She was preceded in death by her parents; her sisters, Maxine HAHN, Dolores SIEREN and Jeri HUBLER; and her brothers, Lester, Donald, Elmer, Erni, and Jim LEDGER. 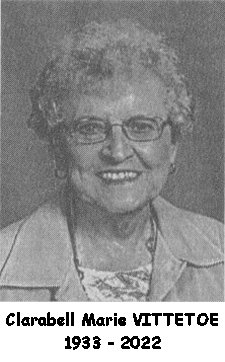