Randal Craig REHKOPF was born on December 17, 1959, in Fairfield, IA, to Richard and Wanda DAVIDSON REHKOPF. He attended school in Fairfield, graduating with the high school class of 1978. During high school Randy was very involved in sports. He was a gifted pitcher and held several school records in baseball. His love for the sport would continue throughout his life as he always supported his St. Louis Cardinals. Upon graduation, Randy worked for a short time at Dexter in Fairfield before beginning his career as a truck driver. He began working for Dickey Transport in Packwood and eventually Panama Transfer in Richland where he continued working up until his health would no longer allow. In his free time Randy loved to golf and if he couldn't be on the course, he would watch it on TV. Randy had a big heart and cared deeply for his family, especially his nieces and nephews and great-niece and -nephew. He will be missed by his family and his many friends.

Randal was preceded in death by his maternal and paternal grandparents; his father, Richard REHKOPF; a brother, Ron REHKOPF; stepfather, Dick ABERNATHY; and his aunt and uncle, Jip and Etta FLEMING; as well as numerous uncles. 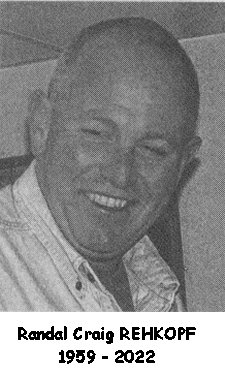