Robert L. RASMUSSEN, long-time state and civic leader of Fairfield, Iowa, passed away with family at his side on Wednesday, October 27, 2021, at Jefferson County Health Center. He was 89.

RASMUSSEN was born on June 5, 1932, in Omaha, Nebraska, the son of Louis and Doris PROHASKA RASMUSSEN. He graduated with a degree in Journalism from the University of Nebraska and was an ardent "Go Big Red" fan. He served as a Captain in the U.S. Air Force and worked for the Omaha Chamber of Commerce before becoming a resident of Fairfield in 1959 when he was appointed Director of Public Relations at Parsons College.

While at Parsons he met Martha WEARIN, who was working as Overseas Travel Coordinator, and they were married April 8, 1962, in Malvern, Iowa.

RASMUSSEN began his long career of state and community service when he was appointed in 1965 to fill a vacancy as an at-large member of the Fairfield City Council. He found city government and leadership to his liking and in 1973, after 7 1/2 years on the Council, he was elected Mayor. Fourteen times Fairfield voters chose him to head their government and he served 28 years in office. A key force in Fairfield's development, there were many accomplishments during his tenure, including: transitioning the Parsons campus to Maharishi International University, building of a new water purification plant, a new waste water treatment plant, expansion of the Fairfield Economic Development Association Park, a new water tower, construction of the Logan Apartment complex, a new City Hall, new city maintenance buildings, development of a Park & Recreation complex, expanded runway facilities at the Fairfield airport and a new city-county law enforcement facility.

In 1973 RASMUSSEN was also elected President of the Iowa League of Cities, an organization representing more than 900 cities and 11,000 elected officials in Iowa, providing advocacy, training, and guidance to strengthen Iowa's communities. In his role as a Field Representative, he amassed many friendships and countless stories while traveling the state and assisting small towns with budgeting and strategic planning.

RASMUSSEN was a member and Elder of the First Presbyterian Church, Elks Lodge, Walton Club, Fairfield Golf & Country Club, Abracadabra, ex-officio member of the Fairfield Area Chamber of Commerce Board, a past Board Member of the Iowa League of Investments, a past President of the Rotary Club and a Mason and Shriner. He was named Outstanding Citizen of Fairfield in 1987.

The RASMUSSENs are lovers and avid collectors of western art and RASMUSSEN served as National Advisory Board President and on the Board of Directors of The C.M. Russell Museum in Great Falls, MT. He and Martha were Honorary Chairs of the Russell Auction in 2001. In addition to travel, the RASMUSSENs also enjoyed time at their home in the Lake of the Ozarks.

RASMUSSEN is survived by his wife Martha, daughter Robin and her husband Patrick BIRD of Los Altos Hills, CA and son Matthew RASMUSSEN and granddaughters Reese and Caden of Newport Beach, CA. Also surviving are his two sisters, Diane ROBERTSON of Omaha, NE and Marilyn JANSEN of Palm Coast, FL. He was preceded in death by his parents.

A memorial service will be held November 19, 2021, at 2:00 p.m. at the First Presbyterian Church, 200 S. Main, Fairfield, Iowa with Pastor Joseph Phipps officiating. There will be a Celebration of Life following the service for family and friends at the Fairfield Golf & Country Club.

In lieu of flowers, the family has requested that donations be made to The Greater Jefferson County Foundation, The Fairfield Golf & Country Club or Noah's Ark Animal Foundation. 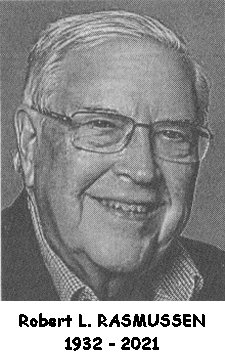