James "Jim" Day HUNT passed away peacefully surrounded by family on Dec. 24, 2020, after a long and courageous battle with Alzheimer's disease.

He was born on Nov. 10, 1939, the second oldest of six children born to Ruth and Thomas HUNT of Fairfield, Iowa. Jim graduated from the University of Iowa in 1960 and Naval Officer Candidate School in 1961. In 1964, Jim married the love of his life, Sandra (Sandy) BUSH, in Rome, Italy. It was a marriage that lasted 56 years until his death and gave them five children and seven grandchildren.

In 1973, Jim started Southern Aluminum Casting Co. and later Southern Aluminum Machining Co. in Bay Minette, Ala. Eventually, both businesses employed over 500 people and supplied engine parts to Ford Motor Co. Jim often said that the harder he worked the luckier he got.

Jim and Sandy lived and raised their children in Point Clear, Ala., for nearly 40 years, and savored walks by the bay, swimming and brunch at the Grand Hotel and evenings with wonderful friends.

He will be remembered as a man of the highest integrity and loyalty to those around him. Jim was always the first at the table to pick up the check and he never put himself first. He loved his wife and children most of all. He also had a passion and joy for his work, the companies he started and all the people he was privileged to work with. In return, they loved and respected him.

In his spare time, he liked to ballroom dance, travel, walk and play golf with his wife. He also enjoyed spending time with his best friend since kindergarten, Lou Thoma. In 1990, Jim and Sandy built a home on Lake Okoboji, Iowa, where they lived spending summers boating and visiting with his brothers, sisters and childhood friends.

Because of worsening Alzheimer's, Jim and Sandy moved to Sun City Center, Fla., in 2014, and they were embraced by a lovely circle of friends and caretakers. He lived through those years with bravery, dignity and grace. Jim was a member of Prince of Peace Catholic Church.

He was predeceased by his parents; son, Brian Patrick HUNT; and grandson, Kendall SAILLER Jr.

He will be greatly missed as a husband, dad, grandfather and friend. A celebration of life will be held this summer in Fairfield, Iowa.

There is an online condolence book at NationalCremation.com. 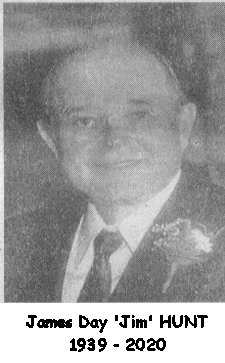