Julie Suzanne BROKKEN, 61, artist and poet of Albuquerque, died peacefully among friends and family on Dec. 17, 2020, after an 11-month battle with melanoma. She was born in 1959 in Fairfield, Iowa. Raised on her family's farm, her youth was rooted in connection to farm life, and deep observation of the nature surrounding herself. These remained an inspiration for her entire life, and wherever she lived she kept a lovely garden. Says a friend, "Anything she touched, she turned to treasure."

Julie graduated from Fairfield High School in 1977 and Iowa Wesleyan in 1983 with a degree in fine arts. Summers, she taught ceramics in the 1980s at Interlochen Arts Camp in Michigan and public school art in Phoenix the rest of the year. While living in Phoenix, she also taught art workshops at the Phoenix Art Museum, worked as a telephone reference librarian at the Phoenix Public Library, as a massage therapist, and was an active artist and teacher at The Farm at South Mountain.

In 2010, she moved to Albuquerque and soon after opened her signature White Butterfly Studio at the Factory on 5th Art Space. Visitors were often treated to a cuppa cocoa or tea while learning about the latest art project. She also was active in the poetry scene in Albuquerque and made many good friends there as well. Her poetry appears in many anthologies and she was featured poet twice for Chatter Sunday. Her artwork has been exhibited in many local and regional shows and she also served as juror for shows. She was a frequent featured artist at Tortuga Gallery in Albuquerque. Her most recent one-woman show, "To Iowa With Love" took place in 2017, back in Fairfield, Iowa, at the convention center, bringing her career full circle back to those early roots. Julie worked in various media. Most recently she focused on photography, collage works, assemblage, and installation pieces. She kept a well-worn satchel nearby full of sketch pads and pencils so she could have a little studio wherever she roamed.

In her spare time, Julie could be found happily walking in the woods (bosque), near the Albuquerque Volcanoes (Three Sisters), up on the green side of the Sandia Mountains, visiting special places such as her bee tree back at the farm, camping, or paddling a canoe. Often, a small natural treasure would be discovered or forgotten piece of rusty equipment that might find its way into a future art piece. She rarely went a day without capturing a beautiful photo. Her life was seldom separated from her experience as an artist.

She is survived by siblings John BROKKEN, Mike BROKKEN and Melinda ESTLE (Sam), five nieces, one nephew, and one great-nephew. She had a large complement of special cousins, aunts, and uncles. Julie was also considered a "Fairy Godmother" to many children wherever she lived, with her special affinity for the magic and wonder of childhood. She was predeceased by parents Wallace and Lois BROKKEN.

Memorial donations can be made in her honor to charities she supported in her lifetime: Valle de Oro National Wildlife Refuge, https://www.fws.gov/refuge/valle_de_oro/ or The Tree Sisters, https://treesisters.org/ - an organization that focuses on the re-greening of dry lands throughout our world. At a future date, there will be memorials in Albuquerque, New Mexico, and Fairfield, Iowa.

Note: According to the funeral home website, Julie was born July 18, 1959. 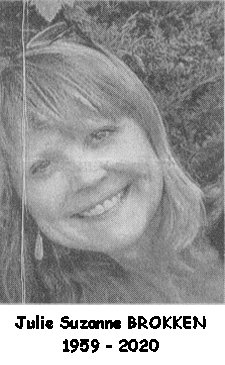