Eunice Marie RUGGLES, 93, of Mt. Pleasant, passed away on Saturday, January 2, 2021, at her home surrounded by her loving family.

Eunice was born on September 18, 1927, near Mt. Hamill, Iowa, the daughter of S.H. and Daisy (HOWELL) GLENDENNING. As a small child, the family moved to Oskaloosa where she attended school until they moved to a farm near New London, where she graduated from high school in 1946. She attended a Bible school in Frankfort, Indiana, one year. In 1947, she was introduced by a mutual friend to Enoch RUGGLES. They was (sic) united in marriage on August 29, 1948, at the First Baptist Church in Fairfield. The (sic) lived in Fairfield until Enoch enlisted in the United States Air Force in 1951. They was (sic) able to be together and spent time in Texas, Illinois and Florida. After these service years they were blessed with two children, Randy and Ann. Eunice worked at several Montgomery Ward's (sic) Stores. She retired from Contel Telephone and then went to work for Iowa Wesleyan College for 15 years. She attended Calvary Baptist Church of Mt. Peasant, was a member of the Gideon's International.

She was preceded in death by her parents, four sisters and one brother.

Private family services will be held at the Murphy Funeral Home of Mt. Pleasant with Reverend Earl Swigart officiating. Burial wil follow in the Forest Home Cemetery, in Mt. Pleasant (note: in Henry Co., IA). Memorials may be directed to the Billy Graham Evangelistic Association, Calvary Baptist Church, and Gideon's International and to Every-Step Hospice in her memory.

Murphy Funeral Home of Mt. Pleasant is caring for her arrangements. 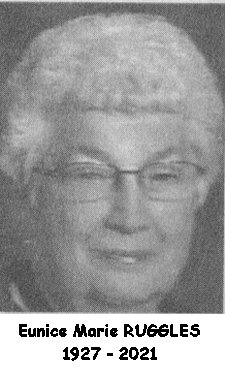